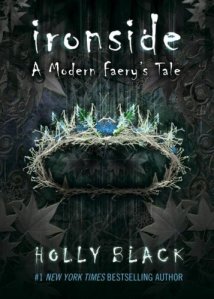 Ironside is the third (and final?) installment in the Faery Tale series by Holly Black.

The first one, Tithe follows Kaye who is "not human and doesn't know it" as she discovers the faerie world and gets caught up in their politics.  The second one; Valiant follows Val as she is homeless in New York City.  Val runs into problems with the faerie drug "Never" – used by the exiled fae to lessen the issues caused by the iron in the city, but addictive and bad for humans. Ironside returns the focus to Kaye and finishes up the story.

The protagonists in this series are teens in the New Jersey, New York area who are independent outcasts, with friends of a similar ilk. There is a familiarity and ease in their conversations that feels real and reminds me of teenagers, except these teenagers are a little bit less innocent than others. They do a lot of adult things like smoke, drink, have sex, take drugs, get themselves in trouble..its all part of the dark edge to these books. The faery side of things is not light and fluffy - they're beautiful but disturbingly dangerous creatures. Humans are of little value and often toyed with because fae have powers and like to have some fun, even if it means death to an innocent that stumbled onto their path. Despite the dark side to the books, there are some happy endings to be expected out of them – each has a bit of romance thrown in, usually between a human and someone they thought was out of their league. It's sweet if you aren't a cynic about that stuff. Underlying that all three books are tied together by the same thread – unrest between the Seelie and Unseelie courts - first there is the unraveling of a peace agreement, then there are changes to who rules the Unseelie court.

In Ironside, Kaye is still in love with Roiben, who is the newly crowned Unseelie king. Kaye lives with humans still, but visits the faerie world whenever she can. Unsure of her place in faerie society, Kaye gets tricked into declaring her love for him publicly, and Roiben responds by giving her an impossible task: find a faerie who can tell an untruth. Kaye can't see Roiben again until she fulfills this task, and if she can't see him, she questions if she belongs with the faerie – there is no one to belong to. This is mirrored with her life as a human girl – her mother doesn't know that Faye is a changeling that replaced her real daughter, and Kaye feels very guilty about this.

My thoughts: I liked this book and it does tie up the story very nicely, though I think I preferred the first two books over this one. The beginning dragged a little for me, but I was really into the story in the second half of the book – I wasn't sure how it was going to end and I liked that. A couple of minor things I guessed, but for the most part I was an on the edge of my seat wondering what would happen to everyone. There was also a couple of cameos from characters in Valiant here too (brief appearances from them with the exception of Luis, who plays a bigger part in Ironside). As usual I really liked the descriptions of the faerie world and how they continue to secretly survive amongst humans (who can't see them as they really are).

There are some minor moments of disbelief – like I have a problem with Kaye being a blond asian (I'm half chinese so I pay attention to mixed race characters, and this little detail bugged me). Being blond is pretty much an impossibility if she is half Japanese. I would believe brown, but not blond (recessive gene yo)! Anyway, this wasn't brought up much in Ironside as much as it was in Tithe.

This book also shifted focus a bit more onto other characters besides the main one (Kaye). We see some of the thoughts of Roiben, who is usually distant and hard to understand from Kaye's point of view, and we also see what's going on in Corny's head. Corny is an interesting character because he's become fragile and fearful after his experiences in Tithe. In Ironside, Corny goes very far to try to protect himself. Actually the theme of doing something that's not quite right because you want to protect something else is a reoccurring one in this book.  Right and wrong gets murky, like life, and this is especially true in Roiben's case, who is responsible for his people and wants to protect those he loves, even when they think he doesn't care about them.

P.S. This is a book I waited to read because it wasn't in softcover. The paperback edition came out July 08, but the hardcover was out April 07. Sigh. Not sure why there was such a long wait there.