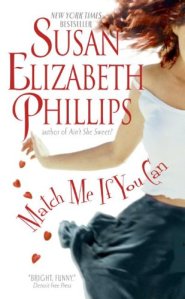 Match Me If You Can
Susan Elizabeth Phillips

I was in the mood for a HEA on saturday and I'd never read a Susan Elizabeth Phillips book (something that I heard should be remedied), so I picked up Match Me If You Can on a whim.

Here's the premise: Annabelle Granger is a vivacious redhead who is starting off in the matchmaking business in Chicago. The business used to be her late grandmother's but Annabelle is modernizing it and changing the name to Perfect For You. She just needs a big name client to help spread some buzz – that's where super sports agent Heath (The Python) Champion comes in. Through Heath's searching for the perfect wife, and Annabelle's connections to some famous footballers and their wives, gives her an in to speak to Health about hiring Perfect For You.

Thoughts: At first I found Heath to be a bit unlikeable but despite a few jerky moves, his overall motivation seemed honest and he did acknowledge his mistakes and felt guilt over them.  Health had a strange notion of the perfect wife – refined, intelligent, beautiful, but at the same time willing to be his slave and raise his kids without complaint. His ideas were all about image and his life plan, which stems from wanting to shed his beginnings as trailer-trash, living with a drunk father and no mother, only an endless parade of his father's girlfriends who always ended up leaving. Of course Annabelle is the one for him, but he didn't really realize it. In the meantime they spend a lot of time together, and Heath began to grow on me. His teasing of Anabelle was fun because she gave as good as she got. Annabelle was an interesting character, I had a harder time really pinning her down, I wish I had more time in her head. Sometimes she's vulnerable and insecure, but other times she's confident and articulate.

There were a lot of secondary characters (some from previous books), and also a secondary romance which I liked as much as the primary one. Some of these characters I really found interesting (Dean Robillard, Portia, Bodie) but some of the cameo characters I wasn't as interested in. A couple of characters I could have done without, for example Annabelle's ex. His story felt like a red herring that didn't really add much other to have something for Annabelle to have a complex over. It felt out of place to me, because I didn't think her that deeply affected by it, but perhaps this is splitting hairs.

Overall: This was a fine read. Funny in places, good happy ever after with hero doing some decent repenting and being raked over coals, and good interaction between characters. I also liked how the romance built up slowly and you could believe these two fit together. But it didn't quite do it for me. I have to say that it's one of those times where I can see others loving this book but something didn't work for me personally. I can't put my finger on it really. Maybe the overall plotline just didn't excite me? Maybe it was a couple of odd phrases that jarred me (guinea fowl breasts? use of the word 'spunk'?) that may not even be noticed by others. Maybe it was my mood?  I feel like I will very likely find a SEP book that I will love (I really want to read her newest release), but this didn't quite get there.