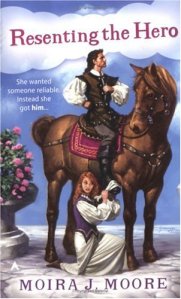 This is a a light fantasy set in a world that does not let technology thrive. It  was populated by colonists who have evolved certain powers to protect themselves from the world's natural forces. Sources can channel the energy from natural disasters (floods, tornados..) harmlessly away, but to do so they often die unless they have a Shield – someone to watch and regulate their body (heartrate, breathing) while they channel. Sources and Shields pair up in a bonding ritual which makes them paired for life – no matter if they have complementary personalities or not. Shields are typically stoic people while Sources are considered emotional and flightly.

The voice of the narrator is Dunleavy Mallorough (Lee), who is a Shield. She prayed for a steady Source, but got paired up with one of the most famous up-and-comers at the academy (Shintaro Karish). Pay attention to the title, that's what this a lot of this book is about! Although she says she found his much gossiped about antics amusing when she wasn't paired, she isn't pleased when they are. They have a rough start because of her preconceptions that Karish will pull her into some kind of trouble because of his "obvious" rakishness. Also, because Karish is the darling of the academy, they are soon sent to the most active post in the country, where Lee is just waiting for Karish to mess up and doom them both (Pairs are punished together). I think that some readers will find Lee's judgemental attitude annoying, and she holds onto it for much of the book, but I think she is a stubborn person who takes a long time to change her mind. I felt that taking so long to warm up to someone is something that happens every so often, especially if you have a stubborn, somewhat naive personality like Lee's, and I could believe the slow progress they make. Also I believe because he is her Source, not someone else's, she is even more hard on him because of the huge impact he has on her life. They can't be separated, and if one dies, so does the other. The writing in the book is good, the adventure interesting (some thought-provoking ideas on Shields and Sources which I hope get continued in following books), but it is definitely a series. Book 2 is "The Hero Strikes Back", I believe book 3, "Heroes Adrift", comes out in 2008, and book 4 is being written by the author. Fast reading and there is an underlying feeling that the two main characters are eventually going to get together although the author isn't going to let that happen until the very end of the series, which may drive some people insane (see pet peeves. I am on the fence about if this is going to bug me since it's only book one, and I think there are other love interests in there).

The one thing that kind of bugged me in the book was this – when Lee talked to someone heart to heart, she doesn't say much. She thinks a lot which the reader sees, but doesn't say this to whoever she's speaking with and gives short answers. She just doesn't say what she's really thinking! Drives me a little nutty.

Another thing: The cover makes it look very much like a comedy, and it isn't. I'm not sure why they decided to market it that way. It's written in a straight tone.

An Excerpt (first few pages of the book)

Here is a review of this book at sfreviews.net (maybe goes into too much detail about what the plot is).

Here is one that seems like a similar opinion to mine.

1 thought on “Resenting the Hero by Moira J. Moore”