Couple of quick reviews. I read some YA in recent months and never posted about them. 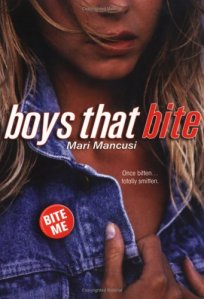 Boys That Bite: This one is about a teen named Sunshine who gets mistaken for her goth sister Rayne (yep, Sunshine and Rayne) by Rayne's vampire sponsor. This means that she gets turned into a vampire when she wasn't supposed to and she's not happy about it. Sunshine has to get accustomed to her new form while trying to find a way to get changed back and trying to pretend to be normal. So she goes to school even though the daylight makes her feel very tired and has to pretend garlic doesn't make her want to run away. Meanwhile Sunshine's mom begins to get very concerned about drugs because of her red-eyed, tired look and pale skin.

This one was a mixed bag. There were some things I liked – a chubby, acned slob of a vampire slayer, some slacker Druids, the humor at times. There were others I disliked, but I think some of them had to be because I keep seeing this in YA –

a) Why is the heroine so obsessed with the prom?

b) Why does a two hundred+ or whatever old vampire even like this teen girl obsessed with the prom? Also does not compute. This is a common thought of mine reading vamp books.. At least here there is a matching system to explain it, which helps.

Overall the main characters didn't feel like they really stood out to me. There were a lot of cliches in their characterization. That said – uh, maybe I'm just not in the age range for this book, and maybe I've read a lot of teen vampire books and I'm just jaded at this point. So taking it for what it was – a light young adult novel – ok it manages to be that. This is the start of a series. Book 2 deals with her sister being recruited as the next vampire slayer, even though Rayne is pro-vampire.

Braced 2 Bite (eck, "2" being used instead of "to", but the rest of this series has numbers in the titles as well so at least theres continuity): There are similarities between this book and the one above – besides the word "bite" in the titles. Again we have a teen girl who thinks about the prom/homecoming who did not want to be turned into a vamp but becomes one against her will. Instead of mistaken identity, Colby Blanchard is attacked by a rogue vampire. Written from a first person point of view (also like the book above), we follow Colby as she pretends to be normal and not half-undead. As in Boys that Bite, there is a vamp society with rules, and unfortunately for Colby, one of the rules is no half-vampires allowed. She has been assigned a Vampire Investigator who may become her executioner.

In this one Colby is mostly concerned about proving that she be allowed to live since there is no way for her to turn back. Her character was very proactive about this, and it were interesting twists to it. For example she was popular before her attack but people start to think she's faking it when she recovers quickly and refuses to go to the hospital. Also her family is all in on her secret and rallys around her (including her dentist dad who outfits her with braces to suck blood), but they don't know about her troubles with proving she be allowed to live. I'd say that my one major complaint besides a little sniff of a) and b) listed above is that this book felt rushed, especially towards the end. This too is the start of a series – book 2 follows Colby to college and continues her activities championing half-vampires.