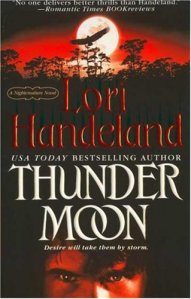 To be honest I didn't expect to like this book. I picked it up at Goodwill because I recognized the author as a popular one and I noticed that the published date was January 2008, so I thought I would swap it on paperbackswap. The only thing I had read by Lori Handeland was in the Dates from Hell anthology and the story in there didn't do it for me (my review of that is here).

So I was pleasantly surprised that I ended up sucked into this book. The heroine is a small town sheriff, with Cherokee blood. Grace McDaniel is capable and independent, and I liked her. She's tired and overworked but also irreverent and snappy. This is a supernatural romance, but instead of werewolves which I was expecting because of the world "Moon" in the title, the night-creature in this instance was one I'd never heard of before, so there were elements of Cherokee folklore that was new to me. The book looks to be part of a series, with references to Claire, who is the mayor, Grace's best friend, and probably the heroine of her own book, but I had no problems following it. A pretty decent read and while I sort of guessed the identity of the creature terrorizing the town, I wasn't completely sure about it till the end, which I liked. The only thing I found jarring was the sudden sex scenes in this book, which seemed to be incongruent with Grace's wary nature regarding men. I found myself saying out loud: what the hell, you're the sheriff, what are you doing?!! which brought down things a notch for me. Still, couldn't really stop reading.

Here's a review at Dear Author which meshes well with my opinion.