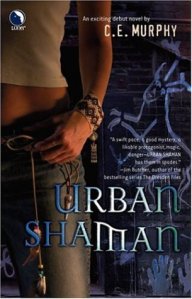 I started the second of C.E. Murphy's series (the Negotiator trilogy) earlier this year, but her first book, Urban Shaman was on my TBR as well. I just read it, and I think I may actually like this series even more.

Joanne Walker is a mechanic with with the police force with both a Cherokee and a Celtic background. She went through the police academy but never used her training as an officer, content to use just her mechanic skills. At the start of this book, she was on the plane coming back from her mother's funeral when she sees a woman in trouble. As soon as she's off the plane, she grabs a cab to help the woman and runs into the Wild Hunt. This sets off a series of events which reveal Joanne's shamanic powers and a whole supernatural world.

This was action packed – one thing follows another story and Joanne goes through a lot – battered from one side and another, and drawing on her new powers to heal herself.  I liked how Joanne uses her mechanic background with her powers – imagining her body like a car and fixing things by using car analogies. It was engrossing to see what would happen next, but there was also some hints of Joanne's past and what Joanne is that was interesting as well. Another strong aspect was the secondary characters – they all had depth and interacted in believable ways with Joanne, from her sidekick cabbie, to her annoyed boss, to her coworkers. It will be nice to see how these relationships develop throughout the series. Looking forward to reading the next two books.