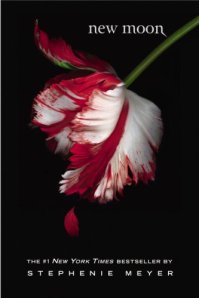 I have written a haiku:

Liked Twlight but then,
Heard Bella is annoying,
Now that’s all I see.

I read Twilight years ago and remember liking it. I thought it was a sweet high school romance, and I remember being pulled in by wondering what was going to happen next - especially the second half when the action kicked in. I enjoyed it. Since then I think the whole world has read the books, and I haven't gone out of my way to read other people's opinions, but it's kind of hard not to run into them. You know when someone points out something annoying about someone that you never noticed and then after that you do start to notice? I think a whole episode of How I Met Your Mother was centered around this. WELL NOW, the whole time I was reading New Moon I was thinking to myself – wow, Bella really is annoying!  Was she like this in Twilight? And Edward really is controlling! I didn't think he was as bad in the first book, was I just completely unaware?

To be honest though, I have an aversion to reading about angsty teenagers. I read Harry Potter until book 5 (Harry Potter and the Order of the Phoenix) when Harry suddenly got mood swings and I just couldn't finish it. That's where I stopped the series. Maybe one day I'll pick it up again, but it's not high on my list.

In New Moon, Edward decides for Bella that their relationship is dangerous for her so he removes himself, so almost all of the book is centered around Bella on her own, and we're basically in her head for months. Months and months of completely dramatic depression. The book felt very long despite the simple writing and the larger font. I kept checking to see how much more I had to read. I seen depressed people, but Bella takes the cake – "catatonic" is used to describe her – and I found myself unsympathetic to someone so self indulgent and childish. Maybe it's my own age and experience here that I don't find it very romantic when someone can't pay any attention to the other people in their lives and only center on their own issues. While Edward is gone Bella begins to use Jacob Black as a crutch. He makes her feel better, so while she knows that Jacob likes her romantically, Bella feels that she needs him and when he holds her hand, she tells herself that Jacob knows that she's not interested in him that way, so she lets him. Strangely Jacob still likes her, no idea why – she's depressed half the time and he notices. I couldn't see what she was giving him besides companionship that wasn't male. I felt that Bella was giving herself excuses to do whatever she wants at the expense of others. This is not a nice trait, and this is not just with Jacob. Whenever things did go the way Bella wanted, her reactions made me wonder if she's as grown up as she thinks she is. To top it off, Bella really believes that Edward lost interest and her response is to become a depressed zombie. Not anger at being thrown off like an old plaything. Yay, women's liberation. Speaking of, it ticked me off that Edward decided what was best for her, and keeps at it later. Their relationship is not healthy. I think in book 1, I was seeing this as one of those intense first loves. Edward wanted to protect her yadda yadda, but it wasn't in your face controlling to me, and at the end of the book there was a relatively happy ending and that was it. But, in New Moon, this intense love continues and the seriousness starts to become disturbing. That they think of themselves as having a love like Romeo and Juliet makes me want to slap them. To compare yourselves to star-crossed lovers who killed themselves is ridiculous!!

Speaking of odd relationships - I couldn't remember why Bella called her parents by their first names and had to cook and clean for her dad. There was a point where she was up to her arms in Comet while cleaning the bathroom. Yet her father was supposedly living by himself before her – is he that hopeless? Or does Meyer only know hopeless men who can't cook and clean for themselves? I'm baffled. Also baffled by how even when Bella is grounded she's still allowed to have her boyfriend to come over every day for an hour and a half. In her room. By themselves. My brow furrows.

Overall: Liked book 1 better. This one makes me feel ranty. In the end not too much happens, though we get some information about Jacob's tribe at La Push and we learn a bit more about other vampires in the world. There is a set up for book 3 because there are rising tensions between Jacob's family and Edward's, but besides that there is very little actual action, and even that is only towards the last 100 pages. This was more a book that focused on Bella's inner turmoil, which made me I feel like a lot of what I read could have been condensed. Even with the ease of reading the simple language, teenage angst is tedious reading material. I have Eclipse and Breaking Dawn on my TBR because they were gifts, so I will shoulder on, but not right away. I really hope that I'm less annoyed by the main characters when I do.