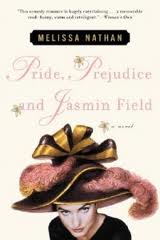 This book is one of those modern day retellings of Pride and Prejudice. Jasmin Field (Jazz) is a reporter at a woman’s magazine who signed up for an audition for a one day “Pride and Prejudice” play, with director Harry Nobel. She finds Harry really arrogant and her contempt is cemented when she overhears him calling her “the Ugly Sister” compared to her actress sister George. What follows is a parallel of the Pride and Prejudice, which is very obvious considering the play and the title of the book, but there are several things I thought made things more interesting – the author focusses on the characters of Elizabeth and Jane Bennet, Mr. Bingley and Darcy more than others in the Jane Austen Novel and there are some twists to the Wickham scandal, the Bennet family and Mr. Collins.

Good things:
OK, the rest of the book – I really liked it and enjoyed myself. I found it hard to put down. Even though I knew what was likely going to happen because I know the Pride and Prejudice story, I thought that Pride, Prejudice, and Jasmin Field was originally done and was humorous. It was very different from the original because of the modern setting, with Jazz/Lizzy having a job as a reporter and her work issues, while Harry’s actor background is very different from the Darcy in Jane Austen’s book. It was fun to see Nathan’s creativity in translating the Austen book to this setting. I thought the romance was very sweet too. Jazz is often really angry at Harry and he’s a bit intimidated, but she doesn’t realize this, so when they get together at the end, it was nicely done, and showed his insecurity. I also thought Nathan’s version of the scene where Lizzy first sees Darcy’s house was very different – you wouldn’t easily guess it until you see it. So discovering what scenes translated to what was fun. I read this book in just a few hours and quickly googled the author as soon as I was done. I was really sad to find that Nathan died of cancer only a couple of years ago, but she has another Jane Austen based novel which I plan to read (Persuading Annie), as well as other books. I think I’m likely to go and devour her backlist, I think I found a new author I love. Judging from amazon though, it was definitely either loved it or hated it regarding this book. Don’t read it if you want something serious and similar to Austen, it’s more like irreverant, chick-lit Austen.