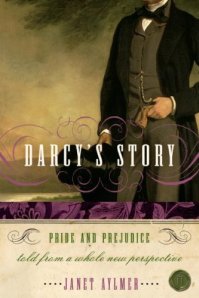 This is probably going to be a Jane Austen week over here because I got into a strange kick that started with picking up Darcy's Story and Pride, Prejudice and Jasmine Field for a dollar at the library store.

"When Elizabeth Bennet first met Mr. Darcy she found him proud, distant, and rude – despite the other ladies' admiration of his estate in Derbyshire and ten thousand pounds a year. But what is Mr. Darcy thinking?"

Unlike the previous book I read, this isn't a modern retelling of Pride and Prejudice, but rather a retelling of the same story from the point of view of Darcy.

My thoughts: Well, it keeps consistent with the plot of Pride and Prejudice, but it lacks something. Almost every scene is exactly the same as Pride and Prejudice, at least the ones with Darcy in them, so I got the feeling that I was just rereading the original story and not seeing anything new – if you just finished the original Jane Austen work, I would not recommend picking this book up right away, it will feel like deja vu. The dialogue is pretty much cut and pasted from Jane Austen's work, and when it isn't it is summarized in detail. I understand that this author wanted to keep as close to the original as possible, but she made the book so safe it was boring. She filled all the "spaces" where Austen's dialogue didn't exist with mundane details of day to day life like how they travelled from London and what stops were made. Otherwise she described emotions with telling not showing. Things did not have the same feel as Austen's writing, which was really underlined when you saw her dialogue in this setting. Aylmer also repeated the same dialogue over and over as Darcy remembered conversations. Even his conversation with his aunt when she confronts him about an engagement to Elizabeth just has her repeating the conversation she has with Elizabeth line for line! In italics too!

I really wish this author tried to bring in more of her own imagination into the story instead of relying so much on the original. The only things new here were a couple of scenes where Darcy talks to Georgiana or his cousin Colonel Fitzwilliam. There is also a brief description of him discovering that Mr Wickham was secretly trying to get his sister's inheritance and quickly stopping it. Otherwise, the book is a quick OK read, but not memorable. I also felt that Darcy was not as strong as he could have been – in this version we see a sympathetic character with faults, trying to do the right thing, but Aylmer really repeats over and over his problems with conversing with people he just met and his jealousy of Wickham, Charles Bingley and his cousin for their comparable ease at this skill. Once was ok, but several times made him sound very insecure and lacked subtlety.