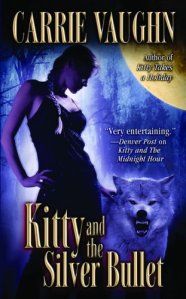 Kitty and the Silver Bullet (Kitty Norville, Book 4)
Carrie Vaughn
Kitty and the Silver Bullet is the fourth of the Kitty Norville series by Carrie Vaughn. The basic idea for those who haven't read my earlier reviews is that the series centers on a werewolf with a talk radio show who introduces the world to the supernatural.
My earlier reviews:
Book 1: Kitty and the Midnight Hour
Book 2: Kitty Goes to Washington
Book 3: Kitty Takes a Holiday
*** Probable spoilers for earlier books ***
The books started in Denver, and while the last couple of books did not take place there, it's Kitty's home. So it was with a sense of inevitability that in Kitty and the Silver Bullet, things come full circle and Kitty has to go back and face what she left behind. The biggest immediate problem is Kitty's old pack and the alpha pair of Meg and Carl who would like nothing more than to see Kitty dead. Of course Meg and Carl are not Kitty's only problems. The politics involving Denver's vampire Family, headed by Arturo start heating up, which means that Kitty eventually has to make some decision about her interaction with them.
Kitty has done some growing throughout the series which really gets highlighted in this book. First of all, she's actually taken seriously by the various Denver factions (werewolf pack, vampire family, human police) and each either finds her a threat or possibly ally. Then in the course of this book Kitty meets someone much like she was when she was part of the pack and the contrast is surprising. Kitty left as a young, submissive cub but she's grown up, and I'm glad she has.
Everything Kitty left behind the first time has to be addressed so the reader gets more details about Denver – we meet Kitty's family for instance. Before they got only brief mentions and her mother was the most mentioned family member, but this book, they play a larger role. I thought it lent a certain normality to Kitty's crazy life. There's also some interesting side character development – as part of this situation Kitty learns some things about Rick and Arturo, and I felt like I learned some more about Ben's (and maybe a bit of Cormac's) character. There was also some fascinating world building, especially in regard to the vampires. It's good to have Kitty know a lot of things regarding the supernatural, but not everything. I loved seeing how Denver fits in with the rest of the country on vampire terms and of course there are some interesting revelations!
Kitty is in a relationship here but I still think that there is a large window for things changing in that relationship. I'm a bit wary of expecting Kitty to stay happy because although Kitty seems to have chosen a partner, she never really closes the door on the other person in the love triangle she's involved in.  I feel like she can easily go back to the other person if something happens with her current choice. Looking forward to seeing how things develop and expecting to be surprised somehow.
Overall: It's pretty good when you think "OK, this is my favorite book of the series so far", then you read the next book and think – "OK, this one is my favorite book of the series so far!" There was a lot going on in this one, but in a good way. There was a good mix of interesting plot twists, action (lots of it!), character development, and intrigue, with a bit of relationship drama thrown in. In the end I was quite satisfied with this installment.
Carrie Vaughn's website
Calico_reactions Kitty reviews