Skip to primary content
I could have posted this yesterday after I came home from BEA but I had personal stuff to do and then I was pooped: my muscles ached and strangely my big toes hurt (I have no idea how I managed that). Yeah yeah poor me, having to lug millions of free books around. 😛

So my last BEA posts didn’t go into a lot of detail so I wanted to do a more comprehensive post.

I slept OK Thursday night except it did take me a bit longer to actually fall asleep because of the excitement of going to my first book convention (informal poll shows that no one slept much the night before). I woke up at 7am to catch a train into Grand Central and got to BEA at the Javits Center before they even opened at 9am.  I saw this really long line after getting my press badge and I asked what it was for: it was to get in! Anyway, once the doors opened, it was not too crowded. My inner child was running around and screaming at the top of her lungs with glee. Free books! HUGE ASS PILES OF THEM ON THE FLOOOR. I played it cool though, I’m pretty sure I didn’t have a fixed grin on my face. I think.  It was hard to resist going crazy but I only took books I was interested in reading and I mostly strolled really quickly up and down the floor trying to get an idea of where things were and what types of things were going on.

At 9:30 there was a blogger meetup set up informally by Stephanie from The Written Word (she has my eternal undying gratitude for walking me through online registration for BEA and organizing email communication with book bloggers going to BEA. I think she helped out a lot of bloggers in how to register, she’s the queen!) – so I went to the Media Center to meet people. I met Alea from Pop Culture Junkie and “Irish” from Ticket to Anywhere and Sharon from Sharon Loves Books and Cats and pretty much glommed onto them for the rest of the day. These three seem to know what’s going on in the young adult book blogger world and there were a lot of young adult book bloggers at BEA. They all told me to read Sarah MacLean’s The Season and even introduced me to the author (who was so nice she went back to get me a book to autograph). They were also all talking about Suzanne Collin’s signing for her new book Catching Fire.

I met a lot of authors and got books signed, but I think the starstruck moment for me was Shannon Hale (link to her post on BEA). Actually we all were at the Bloomsbury booth and noticed her new book The Actor and The Housewife was right there. We all picked one up and started going on about how we love her, and someone at the booth said: “You know, the author is right there and she’s signing books now”. She was sitting 6 feet away and there was no line. I ended up getting her autograph twice – the other book was Forest Born. HEEEE. I was also happy to get Scott Westerfeld’s autograph. Of course when I meet authors my mind kind of blanks and all I can say is “Um, Hi, can you please sign my name J-a-n-i-C-E?”… sigh, and I also didn’t have the presence of mind to get pictures of them! I’m dumb! Next time. I texted my best friend afterwards something like “I just got Scott Westerfeld’s autograph!” and she was amused.

I had planned to go to the BEAtweetup at 8pm after BEA, but at 3pm I was so exhausted after walking around for hours and just being excited for so long that I called it a day. I’m not sure how people managed to do BEA and then go to a party afterwards!

I slept EVEN WORSE Friday night even though I had one day of BEA under my belt. I kept thinking of all the author signings I wanted to go to and planning in my head. I really wanted to get Gail Carriger’s autograph because she was at the Orbit booth at 11am and I also wanted to go by Harlequin because both Rachel Vincent and Gena Showalter were going to be there signing their Harlequin Teen titles also at 11! Ack! I managed to get all the books I wanted though, but I was so excited the night before!

I had talked to Katie from Babbling about Books, and More and we’d planned on meeting at the tweetup, but I couldn’t do it so we ended up meeting for the first time Saturday morning. She’s as cool and enthusiastic about books in person as she is online! And she’s hooked up with the romance blogging and reading community so through her I also met Stacey Agdern, Kris of Love Letters Magazine, Marisa and Maria from RNTV, Kwana of Kwana Writes, and Leanna Renee Heiber (author of The Strangely Beautiful Tale of Miss Percy Parker, which I have been eying).

My meeting with them was brief though because between running around to get autographs, standing in line, and picking up books I had to go to the Firebrand Booth for the Blogger Signing. I got to meet Michael Cairns from Personanondata and see Sharon again (Michael thought Sharon and I blogged together because we spent several minutes chittering excitedly about BEA, and was surprised we’d just met the day before).  I was convinced NO ONE was going to come see me at my blogger signing, but was pleasantly surprised that some people stopped by. And I recognized some of them, like Miriam Parker from the Hachette Book Group, author Marjorie Liu, and the first person who came by – Angie from Angieville! I was REALLY happy to see Angie because I love her taste in books and read her blog regularly (she and I both read a mix . She reads urban fantasy, young adult, and fantasy) – we both noted that we didn’t see much urban fantasy at BEA but a lot of young adult – must be where the growth is happening in publishing, hmm.

After the blogger signing (I didn’t really hand out autographs, just my card, but Sharon was a master at talking to people coming by and signing!), I rushed by the Dabel Brothers booth because Angie had told me about the copies of the Mercy Thompson comic there – there weren’t any left. They said there would be more on Sunday but since I wasn’t going to be there Sunday, one of the guys at the booth, Rich Young, gave me his copy – talk about a nice guy! Uh, I love Dabel Brothers now, just had to say that. 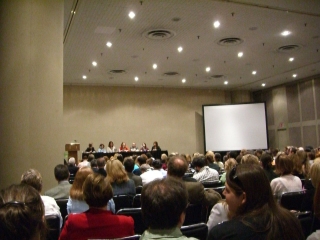 Finally there was the blogger panel. I’m so bad because I got there a bit late. It gave me warm fuzzies though that the session was full and people were all taking notes about how to communicate with bloggers. I thought all the girls on the panel were very articulate and made a lot of interesting points. One point they made that I liked was the idea of repaying bloggers by giving us traffic – linking to our reviews or contests so that new readers can learn about our blog through a publisher or author. Most of the bloggers said they did not have advertising and did not get paid for their work so traffic was a nice thing to get after they spent the time and energy reading and reviewing a book. I want to now link to Katiebab’s post because she took good notes about this panel and I think she makes some interesting comments about it too.

I had to run off in the middle of the blogger panel because I wanted to get in line for Holly Black and Cecil Castelluci’s signing for their book Geektastic: Stories from the Nerd Herd (Cassandra Clare was signing too). This was a really popular book and I was glad I left early because I ended up standing in line for about 30 minutes.

There were a lot more authors around for signings on Saturday than on Friday. I got a lot of books signed. I saw Sarah Dessen, Craig Ferguson and James Patterson but their lines were so long and I was so pooped getting signatures for the authors I’d *planned* to get signed, not to mention carrying the books, I thought it would be best to pass. 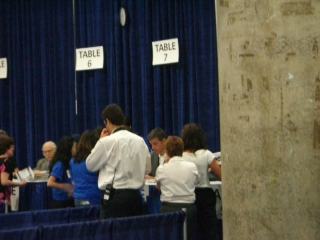 My advice for going to BEA: