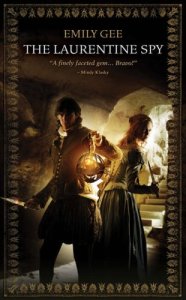 The Laurentine Spy
Emily Gee
I got Emily Gee’s two books for my birthday after both @angiebookgirl and @booksmugglers pimped the books to me on twitter. I’d already been eying this author because of recommendations at the Paperbackswap forums, but those two tweeters tipped the scales. When I was in high school my favorite genre was fantasy, and in college I began to get more into authors who wrote fantasy with romantic elements like Sharon Shinn, Robin McKinley, Patricia McKillip, and Anne Bishop. Emily Gee seemed to fall under this category, so I’ve been looking forward to trying out her books.

P.S. I love how atmospheric this cover is. Very nice.

The Premise: The Laurentine Protectorate (aka Laurent) and the Coronese Empire (aka Corona) are neighboring countries who are in a constant state of unease with each other. Corona has a taste for acquiring more land and is constantly trying to add to it’s holdings. It is a place where men love war and debauchery, and will fall on their swords for failure, and women are demure and do all that their husbands say. Laurentine is less restrictive and believe in more artistic pursuits than Corona, but they also have their own issues, like a very frivolous upper class.

There are three Laurentine spies in Corona. They meet in the catacombs under the Coronese citadel, know each other as One, Two, and Three, and follow the orders of their guardian. One pretends that he is a Coronese lord (and well-known fool), called Lord Ivo, Two is a servant, and Three is a lady of the court named Lady Petra.

Athan is One and Saliel is Three. As spies they have an interest in one another, but they don’t know who the other really is. Saliel/Lady Petra dislikes Lord Ivo, and Athan/Lord Ivo thinks Lady Petra is the epitome of a Coronese lady: virtuous and subservient, and therefore not his type, but is drawn to her red hair.

Meanwhile Saliel has a couple of secrets -her birth in the slums and the ability to “hold” someone with her eyes. She knows that if her birth was known, she would be shunned by any respectable member of society, and for her ability, she could be burned as a witch. Saliel and her fellow spies’ problems are further compounded when a Spycatcher known for getting results is brought in.

My Thoughts: There are a lot of suspenseful moments in this book. First there’s the problem of being spies and trying to find out secret military information without getting caught. The ways Saliel, Petra and Two found out things and then added them together to discover Corona’s plans was fascinating. Then when the Spycatcher is brought in because they did a good job and Corona is sure spies had to have discovered the plans, their interaction with the Spycatcher were intense.

Saliel’s fears of discovery are two-fold. Being a spy and her magic. Both Corona *and* Laurent have a fear of witches, who get burned in giant bonfires whenever one is caught. The whole town is involved and loves to see a witch burn, because these creatures have the ability to make people do things against their will, and there is a lot of fear attached to such a power. Saliel’s ability is not that great, but it’s still enough for her to die if anyone found out about it.

So there are intense moments when the hero and heroine are close to getting caught, but sometimes the pacing still felt a little slow as they went through their daily lives at the citadel. These seemed to show what the world was like however so I kept reading. What really kept me going was wanting to see what happens when Athan and Saliel realize who the other is! I wanted to see what this would mean for their hidden feelings. It felt like they’d never find out, while their guardian knew about it kept it from each other when I thought it would have been better for them to know. He seemed to not see them as people but rather tools (an attitude he had throughout the book which made me dislike him greatly). Saliel and Athan’s complex relationship was my favorite aspect of the book.

So dislikes: I had a couple of problems with the book, but they were (in my mind) minor ones. One was believing that a Spycatcher with the ability to make people tell him the truth didn’t just go up to everyone and ask if they were an enemy spy. Ok, yes, the story would be much shorter and just wouldn’t have worked, but it irked me, and I decided to believe he liked to toy with people and wasn’t the type of person to just ask – it would have been too easy for him. The other problem I had was how at every discovery Athan made about who Saliel really was, he balked, and a convenient event would happen that made him realize how silly his concerns were. I would have preferred him to come to the realizations through some soul searching without something dire happening as if to smack the point into his head.

Overall: Liked the story a lot, especially the romantic part of it – it was the slow, subtle romantic build-up I like reading, which went well with the fantasy parts of it. I do think this belongs in the fantasy section, not in romance however. There were a couple of minor issues I had with the plot that I described in my thoughts above, and at times the pacing was a bit slower than I’d have liked, but nothing that would keep me from reading this author’s books in the future. I think I’m going to keep getting her books, and I love that these are standalones! Yes! I recommend this author for those who like Sharon Shinn and Anne Bishop.

The Book Smugglers (very good, leaning towards and eight)
Lusty Reader (gave it a B+)
Fantasy Book Critic (highly recommended)

7 thoughts on “The Laurentine Spy by Emily Gee”