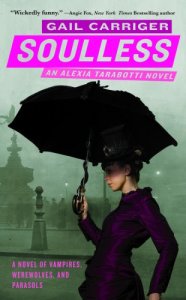 Soulless caught my eye a couple of months ago when I saw the cover, but I really wanted to read it because of the blurb. When I found this book at BEA I was ALL over it, and with the number of entries for my Soulless giveaway, I wish I had more copies to give away, but alas I only have the one.

I was going to write this review and then shelve it till end of September, but a lot of copies of this were at BEA, so I expect reviews to show up pretty soon, and I’ve had a lot of people asking me how the book is!

The Premise: Alexia Tarabotti is a spinster and twenty-six years old (she was officially put on the shelf at the early age of fifteen). The daughter of an Italian and well known for her modern sensibilities, headstrong personality, and interest in science, Alexia isn’t the typical young Victorian lady. She has a long nose, dark Italian skin, and loves to eat (treacle tarts are a favorite).  One night, Alexia attends a ball, and is dismayed to find that the host has provided NO refreshments. Taking matters into her own hands, she asks be served tea in the library. One thing leads to another and suddenly there’s a dead vampire on the library floor and Alexia has to fake a faint. The agents of BUR, headed by Lord Maccon (an irritable, scruffy, Scottish werewolf) aren’t fooled for a second, and she is asked questions regarding their investigation.  Vampires and werewolves are appearing where they shouldn’t be, and disappearing from where they should. Of course Alexia decides to do some investigating on her own, and drives Lord Maccon crazy in the process.

My Thoughts: Wow, this book was a lot of fun to read. The blurb is a spot-on indication of what you’ll find in the book – tongue in cheek stuff, a heroine who is a force of nature, and a romance thrown in.  The author calls the book an “urbane fantasy”, and from what I can see there’s an overlap of genres here. There are romantic elements, urban fantasy elements, a very Victorian setting, and a dash of Steampunk. I couldn’t help mentally hearing the words in a proper English accent. First, no one here says “parasol”, so I had to, and second because of the style of the language. There was even a nod to the old-fashioned in the way the chapters were titled (“Our Heroine Ignores Good Advice” is just one example).  Along with the writing, there are a lot of references to fashions, manners and day to day life of the Victorian time period.

The world here is our own, but Great Britain has had supernatural help to conquer so much of the planet. There are werewolves, vampires, and ghosts, with similar traits to what I’ve seen in other urban fantasy (such as banding together under one Alpha or hive ruler), but the criteria for a human to change into a supernatural is something new. This time the amount of soul a person has is a factor. Only people with an excess of soul can survive the change, and supernatural creatures are rare. Alexia is even rarer, she has no soul. This makes her a preternatural, a person whose touch negates the supernatural completely. I don’t think I’ve seen this before. I’ve read books where one character is immune to supernatural effects, but can’t do what Alexia does.  I like the idea.

The worldbuilding was well done and had enough complexity where I felt that while I was seeing and understanding a lot of it, there is still more to come, perhaps in later books. In particular I think the politics between the vampires, werewolves, and the crown has been touched upon but there is more to explore there.

There are a lot of amusing side characters in this book. Usually there’s one or two side characters I kind of like, but here I liked a lot of them, though they are almost caricatures. The poor best friend with horrible taste in hideous, flamboyant, hats, the gay vampire with his baroque furnishings and coterie of foppish young men, the stoic and capable butler, the list goes on, but it works very well. It’s a comedic ensemble cast (complete with straight men) that buttress our heroine and hero.

This book is also a romance. While this is Victorian England so no sex before marriage, there are serious shenanigans going on that are decidedly more modern than this era. Even knowing what a free spirit Alexia is, there are a few scenes where some artistic license takes place in terms of Alexia’s reactions to her love interest. This was a slightly less believable part of Alexia’s character, but we’re reading a book with werewolves and vampires here, so I didn’t dwell on it. The part that irritated me was the repetition of Alexia’s “flaws” which she and her family were concerned about: that Italian nose, dark complexion, and inability to be controlled. I’d prefer Alexia to have been less repetitive in worrying about these silly things, thinking no one wants to marry someone like that.

Overall: This book is going to be popular. It’s as fun as it looks, I promise you, and I love that this feels like something new. I wanted to pick it up as soon as possible whenever I had to put it down. There’s plenty of action, sly wit, and romance going on to keep the pages turning and I will be reading the second book, Changeless.

There’s an excerpt of Changeless at the back of Soulless, and I’ve already checked, but the release date hasn’t been announced yet.

10 thoughts on “Soulless by Gail Carriger”