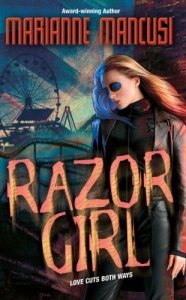 Razor Girl (SHOMI)
Marianne Mancusi
Razor Girl is a book from Dorchester’s Shomi line. I loved this line but it has been dissolved, oh well. I plan try to read all the Shomi books I can find anyway (Viva la SF romance! RIP Shomi!)

The Premise: In the year 2030 a mysterious “flu” decimates much of the population. Razor Girl starts just before this, focusing on Molly Anderson and Chris Griffin, once typical teens with a budding relationship, who are torn apart by what’s happening around them. Six years later, they rediscover each other as adults in a “a plague ravaged, monster-ridden wilderness”. Molly, whose father is a conspiracy theorist and scientist, has had extreme modifications done to her body and has been in an underground shelter since she last saw Chris. She has to meet her father in Disney World so that they can literally save the world. Meanwhile, his time on the surface has changed once-geeky Chris (now Chase) into a man, but he remembers all too well the betrayal of Molly’s abrupt disappearance six years ago.

The book jumps back and forth between the past, when Molly and Chase are teens and things are beginning to happen, to the future six years later, when the two meet again.

My Thoughts: I’d read this author’s YA offering, Boys That Bite (as Mari Mancusi), and it wasn’t for me, but I wanted to give her adult writing a try and found I liked Razor Girl much better.

I quite like the idea that Molly is a Razor Girl, based off of Molly Millions in William Gibson’s Neuromancer, but I never read that book, so I wonder what references I may be missing. I did read Gibson’s Burning Chrome, which has Johnny Mnemonic in it and Molly Millions makes an appearance, but I don’t really recall it very well. Anyway, there seems to be enough to understand it.

Molly has retractable blades that come out of her fingers and ocular implants, and because she has to be tough, she doesn’t cry; her tears are redirected to her mouth and she spits. It’s clear from what he’s done, her father is very extreme in his beliefs, and his influence is felt throughout the plot. Molly has been taught how to fight because of her father’s paranoia, which is helpful when she comes out of her shelter to kill off the zombie-like creatures that now populate the streets (man, zombies are popping up in a lot of my reads these days).  Molly’s enhancements give the book a bit of an eighties movie vibe – like Tank Girl or  Mad Max, and it makes for a very cool cover (one of Tez’s favorites).

As I mentioned earlier, the story jumps back and forth in time from a teen to adult perspective. One chapter would happen in the 2030, one in 2036. For the most part it worked, although a couple of times I ended up guessing what happened when they were teens from what I’d inferred when they were adult. As a teen it seemed really sweet how big a crush Chris has on Molly and how he wins her over eventually by just being a nice guy who was willing to listen to her. Once he’s an adult, he has some resentment towards Molly’s disappearance, but I can’t help feeling he still has an idealistic view of her that never goes away. OK, maybe that’s part of love, but I’d like to see more acknowledgment of each other’s faults in a couple. I think that there was something missing and this was part of it – not enough delving into the characters for me. Even when Chase is hiding a serious problem and gets himself into trouble because of it, it felt like we only scratched the surface into that issue before it was “resolved” and put away, as were other serious incidents.

One minor nit I will mention – this is a copy editor thing that threw me out of the story. A character who Molly has just met, knows her name without her telling him what it was.

Overall: Not bad. Razor Girl definitely has the traits of the typical Shomi: a futuristic setting, action (with zombies!), and romance, but sometimes my attention wandered and I’d want to put the book down, particularly in the scenes when they were adults. I can’t really put my finger on why, so it could just be a personal reaction. Anyway, I seem to prefer the teen perspective: the romance then was cute, and because of their past I could believe in the couple reconnecting, although I felt that Chase idealized Molly.

Popin’s Lair gave it 5/5
The Good, the Bad, and the Unread gave it a C (similar thoughts to mine in their review)
Katiebabs gave it a B (I really liked her review)