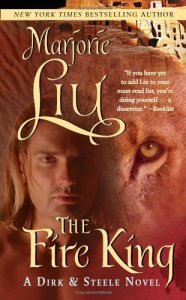 The Fire King (Dirk & Steele Romance)
Marjorie Liu
This book was sent to me by Dorchester publishing.

The Premise: The heroine of this story is Soria, a woman with an extraordinary ability to pick up languages. It’s always been the case since she was a child, and people call her a prodigy. They don’t realize that it’s magic, and that the mere presence of a fluent speaker is all she needs. It was a useful gift when she was with the Dirk and Steele agency, but after the loss of her right arm, Soria had a falling out with them and left. Unexpectedly, the agency makes another appearance in her life: they want her to go to China, and speak to Karr, a mysterious shape-shifter who speaks no known language.

This is a Dirk and Steele novel (#9?), but you don’t have to read this series in order to enjoy the book. I had only read book 1 before this.

My Thoughts: The first part of the book had me hooked on the characters and wanting to learn their back story. First: a heroine who recently lost her arm?! From what I could tell it happened about a year before this story starts, and Soria’s still recovering from it (feeling it’s ghost, being aware of people’s reactions).  I was burning with curiosity about what happened and why Soria blames herself for it. Tantalizing hints were dropped like breadcrumbs, but it wasn’t enough to figure out the whole story. I had to wait until Soria told it.

Likewise Karr’s story is mysterious as well. How in the world is he alive after three thousand years in a tomb? Then, what is he? At first I thought he was feared because he was so strong and killed a few people when he woke up, but that wasn’t the only reason. The cover of the book is a little deceptive – it has a lion on it. I thought he was a lion shapeshifter. Nope, not quite.

The book has a bit of a romantic suspense quality to it mixed with the paranormal elements. Both protagonists are cautious about each other (Friend or foe? Are my instincts right?), but they also have to deal with complex plots surrounding Karr and what people want with him. The romance was about equal to the suspense and action. It progresses at a natural rate, and by the time the two say their “I love yous” it’s a given. I thought that although Karr is over 3000 the age difference didn’t count because he’d been “dead” most of the time. The romance was nicely paced.  Although it did a lot of things I expected, I did like how communication is explored in their relationship.
I’d read the first Dirk and Steele (Tiger Eye) before I had this blog, and in that book, the agency was family-like. In The Fire King, it no longer feels that way. Dirk and Steele suddenly seem more shady and Roland is tight-lipped, nursing his own agenda. It’s hard to tell who the good guys are and there are surprises about who is after Karr.  Then of course there are the very enigmatic side characters (I think that they may be reoccurring ones, but not sure). Mercenaries Serena, Robert and Ku Ku (Gogo Yubari’s twin) make appearances. As does a character who appeared in Tiger Eye.

The plot was complex enough for me to like it. There were some not quite black or white parts to the characters and some surprises. By the end of the book things made sense, but I had to think it over a bit, which isn’t a bad thing. On the other hand, I felt like I’d wake up in the middle of the night saying “a-ha a plot hole!”, because I had a nagging feeling at the end of the book, but it’s been a few days and that didn’t happen yet. There very minor things like how Soria could make braids with one hand or how Karr and Soria’s mental connection worked, but not enough to really bug me while I read. I guess the biggest problem I had was that the protagonists kept getting helped out by others. I would have like to see more of them working together to get out of jams, because I liked seeing them interact.

One of my favorite parts of the book was the setting – in northern China and Mongolia. The non-American setting, where the reader is really aware of life in another country, not just aware the book is set there and nothing else, is refreshing. I particularly enjoyed reading about the ger of the Bhatukhan people (I wanted to sleep in one!)

Overall: I like the writing style, the setting, the characters. The romance progressed at a nice pace, and although it goes through some familiar phases, their bond of communication was intriguing. I had only minor quibbles on the plot (see above). I don’t read as much paranormal romance as I do urban fantasy, so my reading in this genre is limited, but I thought this one was well-done.

Other reviews:
My Favourite Books (Nice review. They liked it)