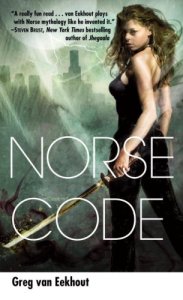 Norse Code
Greg Van Eekhout
I saw a few reviews of Norse Code when it came out a few months ago (in May), but I had a hard time deciding whether to pick it up based on them. To make my decision for me, the ever awesome calico-reaction sent me a copy and I finally read it this week. 🙂

The Premise: This is an urban fantasy which takes it’s fantasy elements from Norse mythology. Mist is a once-grad student who was murdered and became a Valkyrie. Now she works on project NorseCODE to increase the number of warriors in Odin’s army for Ragnarok, the Norse version of Armageddon. Meanwhile, Odin’s wanderer son, the god Hermod is also working to prevent Ragnorak. Their two stories overlap in a series of odd adventures on Earth and elsewhere.

My Thoughts: The book begins with an event amongst the gods which was believed to be the first sign that Ragnarok will come to pass, and then thousands of years later, we’re in modern day United States and it looks like Ragnarok is right around the corner. At first I had a hard time figuring out where things were going (Mist suddenly decides she’s going to rescue her sister from Hel, Hermod is off in California looking for wolf pups who will swallow the the moon), but once a mutual objective was decided, things got more interesting. Actually – I had no clue what Ragnorak was, Norse mythology is something I know very little about so that’s probably why I was semi-mystified. I think I only know some of the big names like Thor, Odin, and Frigg, and most of those is from learning where the names for the days of the week came from sometime in middle school. Looking at wikipedia, the basic story of Hermod and his brothers, Höd and Balr used in Norse Code is taken directly from Norse mythology, so those more familiar with it would probably pick up the story faster than me, but I had no problems following once I did.

The other bit of confusion on the book may be the shifting points of view. Most of the book is told from the third person, focusing on first Hermod, then Mist and vice versa, but there are also chapters told in the first person from one of Odin’s two ravens, who constantly fly everywhere and take note of what is going on. This gives the reader an opportunity to find out what other characters are up to while Mist and Hermod do their thing, and it does fill in the blanks which would otherwise be there, so I had no issues with this, but I can see other readers not particularly liking the multiple POVs.

There’s a lot going on in this book. As soon as the adventurers jump out of the frying pan, they’re into the fire, and no matter what they try, the next step towards Ragnarok happens. Yet Mist and Hermod keep trying because if they didn’t, the world of humans, Midgard, would be lost forever. Because of this, the book is primarily an action-adventure as our heroes scramble to prevent the inevitable, and character development is produced in quick, hurried strokes. A look or sentence here and there throughout the story. If you don’t pay attention, you’d miss the smidgen of romance or the nature of relationships between siblings. I found this OK, since the story itself was interesting enough, I didn’t need to focus on the characters, but it would have been nice to get into the character’s heads more. I thought that Hermod was the best-written character in the book, perhaps because he had the best lines. The humor in this book sneaks up on you. There’s one particularly brilliant scene where Hermod reads a note from his father aloud, and rather than reading what it really said, he inserts his own version which made me want to laugh and cry at the same time.

This book is categorized as “urban fantasy”, though I would nitpick a bit there and call it “contemporary fantasy”, just because so much of the book doesn’t even happen on Earth as we know it. There are a couple of books that it reminded me of, in a very cursory way: Kresley Cole’s Immortals After Dark series, just because of the Valkyries, and Justina Robson’s Quantum Gravity series just because of the use of interconnected worlds with some similarities (lots of ‘heim’s). Yes, people who have read these books, they are NOTHING like Norse Code whatsoever, but I like pondering how authors take a concept in very different ways.

Overall: I liked it in a “Oh, that’s a clever idea” kind of way. I probably would enjoy it more if I knew more of Norse mythology so I could have fun identifying myths and gods, but I wasn’t so confused I couldn’t follow the story. There’s a very readable writing style, and the moments of wry humor tickled me. I’d recommend reading excerpts to get a feel for the book before you buy.

P.S I think this is a standalone.

Other reviews:
Calico reaction rated it as give it away.
Scooper Speaks “interesting, but [..] a tad bit choppy”