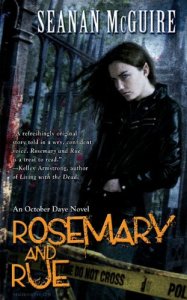 Rosemary and Rue:
An October Daye Novel
Seanan McGuire
I kept seeing good reviews of the debut novel by Seanan McGuire everywhere, but Urban Fantasy (one of my fav blogs), really cinched my interest when they recommended Rosemary and Rue “especially for fans of Ilona Andrews or Patricia Briggs.” After that I was sold! I planned to buy this, but got lucky and won it over at Lurv a la Mode. 🙂

The Premise: This is the first book in a series about October (Toby) Daye, a changeling living in San Francisco. Toby is detective who has had it with the world of the Fae but her resolve to stay far from it dissolves when a pureblooded fae calls her before being murdered and puts a curse on Toby to find out who killed her and why.

Excerpt of the book

My Thoughts: It didn’t take me very long to fall in love with the world building in this book. The prologue was a mind blower (and in this case you HAVE to read it to make sense of what happens afterwards and why Toby wants to distance herself with her faerie friends), and I started getting excited about having another author to stalk. Deety at Urban fantasy had said, “there’s a level of uniqueness that makes this book stand out from the pack” which I saw in the way the world of the faerie blended so well against the backdrop of San Francisco. I just loved how Toby, our narrator would explain the world as things were happening. I could see San Francisco and I could see the hidden parts and faerie creatures that were everywhere for Toby, but hidden from human eyes. Some parts are beautiful, some are scary and gritty, and there are so many varieties of creatures from Pixies and Undine to Cait Sidhe to Kitsune. And then we have the halfbreeds and the changelings, like Toby, who are considered lower caste for their human blood, diluted magic, and shorter lives. In Toby’s opinion, changelings have the short end of the stick, because no one knows what to do with them really, they don’t belong in the human world, but they aren’t treated well by the faerie.

There are quite a few characters we’re introduced to throughout the book. Toby has a lot of friends, many with back stories hinted at throughout the book. I liked a lot of them and wanted to read more. Hopefully many of them will be reoccurring characters in this series. There’s also suggestions of possible romantic interest in Toby, but only very brief ones, this is still an urban fantasy. Two of these guys I firmly believed to be *wrong* for her and I was rooting against them. I already had my favorite ship, which I share with Ana of the Book Smugglers – Tybalt, the king of the Cait Sidhe. Ana says in her review, “Even though you try to hide your feelings, I know, deep down you so totally love the woman.” – exactly!

Toby is unusual for wanting her own life and a job outside of the faerie world. After what happens to her in the prologue her pulling away from it further made sense as well. The prologue gives you a pretty good indication of the author’s storytelling – things get messy for our heroine. This book has some gritty aspects along with the prettiness: deaths, kids being exploited, unhappy people. Toby makes mistakes and the bad guys are willing to do anything to get what they want. This means Toby gets very beaten up in this book while trying to figure out who killed her friend.

And this is where the flaws in the book come in. I was really happy reading the book until about halfway, when my glee and lovefest began to dim. I wasn’t sure why until I read some other reviews which pointed out what the problem was: Toby kept getting railroaded by the bad guys, over and over. She almost dies a few times, and still she has to keep moving and running around or she will die. When Toby finally figures out what was going on, I didn’t think it was her sleuthing skills so much as dumb luck and a lot of help along the way. The consequences of who it ended up being are very interesting, and I liked that Toby finds out some harsh truths about herself, but the constant rebounding Toby has to do to get there was exhausting. I also ran into a pet peeve which is a character having sex after almost dying – that’s just not realistic!!

Anyway, despite those quibbles, I really liked this book, and I’m very happy that there’s a second and third book coming out quite soon – A Local Habitation comes out in March 2010, and An Artificial Night comes out in September. The only problem is that I’ve gotten sucked into another series (I can’t seem to help myself), which doesn’t really seem to have an end in sight (the author’s FAQ says “several” and hints at eight or more books). 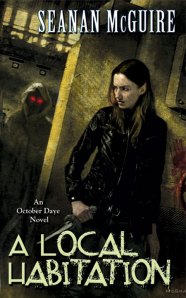 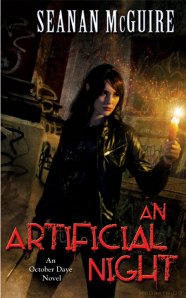 Overall: I’d say it made me excited to read this. The world building was very strong (LOVED it!!!), but the plot isn’t without it’s flaws which made the second half weaker than the first. I am eagerly anticipating the second and third book just to see where things go and hoping Toby gets together with the love interest I’m pulling for.

Reviews elsewhere:
Urban Fantasy – see above 🙂
The Book Smugglers – Thea gave it a 7, leaning towards and 8, Ana gave it an 8
SciFiGuy – “destined for my top 10 list for 2009”
Lurv a la Mode – very highly recommended
Book Love Affair – “love at first sight”

8 thoughts on “Rosemary and Rue by Seanan McGuire”