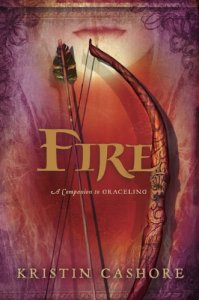 Fire
Kristin Cashore
I was pretty sure I would like this book when Graceling got glowing reviews from the usual suspects (people who have tastes that tend to mesh with mine), which is why I got an ARC copy of Fire at BEA. The next day, when I saw that the author was signing the book, I got another copy. The first copy was contested off earlier this summer, but I hadn’t gotten around to reading Fire until now (what can I do, so many good books in my TBR, so little time).

The Premise: Fire is a 17 year old girl who lives in the kingdom of the Dells. This is a land where monsters live. Monsters are just like their normal counterparts, except they are gorgeous, with amazing colored skin and hair and fur, and they use their beauty to compel their victims to do what they want. Fire is the only human monster alive. The strong minded want to kill her, the weak throw themselves at her feet, and other monsters just want to eat her. This is the least of Fire’s problems because the country is gearing for war. The young King Nash’s position is threatened by a couple of power-hungry lords and although his brother and war commander, Brigan, doesn’t trust Fire, she soon becomes embroiled in their fight to keep the kingdom together.

Read a 40 page excerpt of Fire

My Thoughts: I haven’t read Graceling, and I had no problems because of this, so I will happily say that there is no need to read Graceling first. This is supposed to be an earlier companion novel set in the same world but a different geographical location, with ONE (I think) common character, and the rest are new characters. I didn’t even know who this common character was until I saw reviews by people who had read Graceling before reading Fire.

This book started off with a prologue which doesn’t come into play until much later on in the book. I spent some time wondering what the prologue was about because it didn’t seem to affect the story for a long time. But it does finally come into play, so you do have to read it. When the book really starts, we’re introduced to Fire who has just been shot by an arrow, but accidentally, which is a surprise to Fire. Fire believes at any time she could die, either from a monster attacking her and her not being fast enough to avoid it, or from someone going insane in her presence, killing her.  At first I didn’t really grasp the monster concept and what it really meant for Fire to be one, but over and over again, everyone’s reactions to Fire, and I do mean everyone’s, is to first see her as that beautiful monster. By the time I was done, I was right there with Fire in being completely sick of people who couldn’t control themselves absolutely hating her or throwing themselves at her on sight, but it was realistic and a huge part of what she is. It was really a burden, especially because she was a woman.

I loved Cashore”s writing style. Fire is written in the third person, but the focus is mostly on Fire, and I think the author makes a deliberate choice to have the reader experience what Fire experiences. So there’s a lot of showing, not telling, especially when it comes to emotions that belong to people other than Fire. We can see their faces, but we’re left to interpret what emotions propel their facial expressions and body language. I love that I don’t always know whether my guess is correct, and the author doesn’t lay it all out there clearly. It also makes Fire the focus of all my emotional empathy, and boy, does this girl go through things. Because of Fire’s father, another human monster, a selfish man who was adviser to the previous king, Fire is the target of hatred because of his sins. There’s only her neighbors, Lord Brocker and his son Archer who seem to care for her, but as the book continues, Fire’s strength earns her more friends. It’s not easy. There are some scenes of very realistic grief, the kind where you are so sad and depressed, all you know is feeling, not logic. I wanted to cry with her. Don’t worry though, this is not, for the most part, a sad book because Cashore writes things in a way where I could accept the sad parts and move on. There is more hope and happiness, and a big part of that is the romance.

The relationships between characters in this book were just amazing. Even the minor characters had individual personalities and impacted the major characters, but my favorite relationship was of course the romantic one! I think it was quite obvious from quite early on who Fire was going to end up with, but the journey to get there was gradual and lovely. It was a mental process, although Fire and other characters are not shy about sex. Actually, despite their young age, and although Fire is categorized as young adult, most characters had adult responsibilities and were mature people. The writing has a simple, no frills feel of a young adult book, but there are a lot of themes which makes this book have an adult appeal.

Overall: I thought I would like it, but Fire really bowled me over: I loved it! Superb writing, fantasy with a really sweet romance, and amazing character development. It’s a young adult book that has adult appeal. I highly recommend it, especially if you are a fan of Robin McKinley or Sharon Shinn or Maria Snyder. I closed the book with a sigh, and then I hugged it.

Other reviews:
Angieville – she loved it
The Book Smugglers gave it a 9, Damn near perfection
Steph Su Reads – 5 out of 5

5 thoughts on “Fire by Kristin Cashore”