I haven’t posted in a while. Looks like it was just a week, but feels like longer. I think I was having a bit of a reading/reviewing slump. I have about three books to review and I’m just slogging through those slowly, but the reading is getting better – I’m now into the first of the Brent Weeks Night Angel Trilogy. This is a series my husband gave me to read a few months ago and I’m finally reading it (See? I DO eventually try to read books you suggest)! At first I liked the pacing, but the world building wasn’t wowing me, but now I’ve encountered a few surprises and the plot has lots of entangled threads so I’m enjoying it more and wanting to know what happens next. It’s a long book though (over 600 pages).

To tide people over, here’s some pictures!!! A friend and book blogger came to visit me this weekend and we had the best grill corned ever. I am usually really meh about corn, but she would not SHUT UP about it for more than 30 minutes so we went to Cafe Habana in SOHO and tried it.  They cover it in a mexican cheese that’s similar to parmesean, and a bit of chili powder and a squeezed lemon finishes off the taste. Very tasty actually: 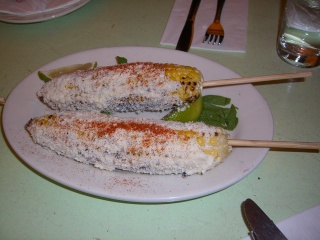 And then I nagged people into going to The Strand bookstore because I don’t think I’ve been there in over ten years (even though I really don’t live very far from NYC). I was reminded why I wasn’t impressed by the Strand. They have a sort of smallish SF section in my eyes, and the romance section is 2 bookshelves in the basement. Two bookshelves that aren’t all romance. We had a little WTF moment over this. But on the other hand, I thought the YA section was awesome.

The Strand: view of shelves on the 1st floor

In the YA section I peered at the ARCs for sale there and got a couple ($2 each!). Note how the Nicole Peeler book was mistakenly shelved as young adult. It’s not YA. Gateway has a romance between an asian girl and a white boy, which is why I got it (and I like Sharon Shinn). The Strand YA section was VERY nice, although I found it rather confusing that they had young adult broken into subgenres. It was hard to find things quickly by just author. 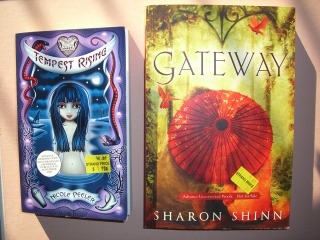 We also went to the Met and then ate again at a cantonese restaurant, and then went for drinks (I had a delicious non alcoholic midori soda. SO tasty), but I think people may get bored of my millions of pictures of food (it’s what we do when we get together. Eat).