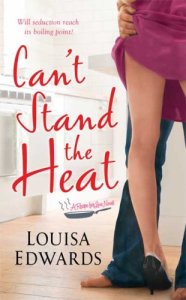 Can’t Stand The Heat (A Recipe for Love)
Louisa Edwards

The Premise: It all starts the opening night of Adam Temple’s restaurant, Market. In a room full of press, foodies, and society people, Délicieux food critic Miranda Wake, tipsy on the alcohol in ready supply and impatient to be served, interrupts Adam’s opening speech with quick judgments about the food.  He responds rashly and a challenge is thrown down: “You wouldn’t last ten minutes in my kitchen.” To Adam’s horror, Miranda accepts (with visions of a book deal dancing in her head).

Read an excerpt of Can’t Stand the Heat

My Thoughts: From a food lover’s point of view, this book is a lot of fun. The author really puts you there in a busy kitchen in New York City. Her writing has an exciting flavor – it feels very modern to me, maybe because it doesn’t try to make things more refined than they are. The kitchen is full of characters, people who are rough and loud, but very close knit and fit into the restaurant life. Details about the stations, the pecking order, the bustle, and the cooking seem well researched but presented in an exciting package.  The food is a large part of the courtship: Adam shows Miranda how to make poached eggs and waffles with bacon, and despite his initial misgivings, Miranda’s unfiltered appreciation for Adam’s food wins him over.

I really liked Adam. He has passion for Market and he’s alive when he’s there – the center of the hurricane of activity, he seems really happy with his life: his new restaurant, a well-tuned crew, doing what he loves. Adam’s intensity of focus as the head chef is heady stuff to Miranda, who likes her job, but sees it as a job, not as a passion. Miranda’s ambitions are a result of her responsibility in raising her younger brother, while Adam loves making food for itself. Despite Miranda quickly annoying Adam with her plans to “expose” his restaurant with a book and interviewing everyone with that goal in mind, Adam doesn’t stay mad very long. He doesn’t dwell on Miranda’s mistakes, and focuses his energies on noticing how pretty and smart he finds her. It was surprising how quickly he was willing to forget that he was angry with her, but his quickly dissolving temper and zest for life is a consistent part of his character so I let it go. This is a good thing in this relationship, because Miranda is constantly doing things I considered low.  She has her reasons, but they were tenuous, and I found myself on the edge of disliking her throughout the book because of her willingness to exploit others.  On the other hand, I felt for Miranda because of her older sister protectiveness of her younger brother, and I liked her persistence in the face of adversity. Unfortunately, this didn’t really excuse how Miranda kept messing up just when I’d gotten over the last thing she had done. The conflict between the hero and heroine never lasts long, mostly due to Adam’s easygoing nature, but it propels the story along to it’s movie-style ending.

There are a lot of strong supporting characters in this book. The people in Adam’s kitchen were drawn very well, and there is hint of sequel bait with Devon Sparks, a TV personality whose restaurant Adam once worked in (confirmed with an excerpt for the next installment of Recipe for Love series).  In particular Adam’s maître d’, Grant, his best friend (and sous chef) Frankie, and Miranda’s college-aged brother Jess. There is a side romance between Jess and  Frankie that affects the main one. Their romance is one of opposites attracting – the shy young college student and the brash, punk-rocking, Cockney cook – it works, although at times I found it over-romanticized.

Overall: I loved the writing style and the way New York restaurant life was represented, and I liked the vivacious hero, but the heroine walked a really fine line for me. Despite this flaw, I would gladly read the next one in this series.

1 thought on “Can’t Stand the Heat by Louisa Edwards”