This is a Bollywood movie which is a modern day remake of Emma by Jane Austen. So it’s like an Indian Clueless (and if you follow this blog, you know that modern-day Jane Austen remakes = my weakness). The part of Emma, now Aisha Kapoor, is played by Sonam Kapoor, and Mr Knightley is now Arjun Barman, played by Abhay Deol. Aisha is an upper class Delhi girl who wears trendy, girly clothes and meddles in other people’s love lives. This is the synopsis from Wikipedia:

“Aisha is a girl with a simple dikat(problem) – everyone’s business is her business. Arjun is a boy with even a simpler set of beliefs – Aisha should mind her own business. Caught in the Delhi upper class world with its own set of social rules, Aisha navigates her world with a great sense of style and even greater optimism. Caught in her web are her best friend Pinky, the small town girl Shefali, the west Delhi boy Randhir and the hunk Dhruv. Aisha will make sure everyone dances to her tune. And all Arjun wants to do is disentangle that web and get Aisha out of an impending sticky mess. Who will succeed and who will succumb? Welcome to Aisha’s fabulous world where playing cupid is as easy as 123…if only that Arjun would stay out of her way!”

This movie comes out August 6th. I NEED to see this! It looks very girly and I’m ok with that. The only problem is that it’s not in English, but I will find a way.

I’m so happy that Masques is being reissued. I believe it’s Patricia Briggs’ first published novel (originally published in 1993), but it’s out of print and hard to find. People are selling it for over $140! Now, I like Briggs, but I won’t pay $140… Luckily, Briggs has become so popular that it makes sense to republish her backlist – Masques comes out this September 28th:

After an upbringing of proper behavior and oppressive expectations, Aralorn fled her noble birthright for a life of adventure as a mercenary spy. Her latest mission involves spying on the increasingly powerful sorcerer Geoffrey ae’Magi. But in a war against an enemy armed with the powers of illusion, how do you know who the true enemy is-or where he will strike next?

What’s even better is that I discovered through the lovely Angieville, that the sequel to Masques, Wolfsbane, is being published this year as well (November 2nd)! YESSS. I’m vibrating with glee right now. 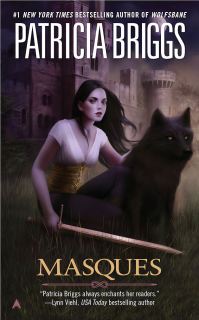