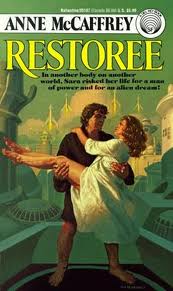 I am not sure where I heard of this book. I thought it may have been somewhere on the paperbackswap forums, but a quick search says no. Anyway, what sold me was someone saying that it was a science fiction that had a romance in it where the heroine’s first impression of the hero was that he was ugly and an idiot. I’d been debating whether to get it but holding back, until I saw it for 50 cents at the a library sale section of my library.

The Premise: Sara is a young, plain looking, twenty-something librarian working in New York City, when one day walking through Central Park she is overwhelmed by a terrifying force and she blacks out. She endures some kind of horror and when she regains her senses she finds herself in a new planet, in a new body, and a caretaker of an a seemingly ugly man with very diminished mental capacity. After some time pretending to be the lackwit the guards think she is, Sara realizes that the man is being drugged. When Sara brings him back to his senses by sharing her undrugged food, she discovers that the man is actually Harlan, the Regent of the planet she’s on – Lothar. Together they escape and try to fight the people who put them in the sanitarium in the first place, and discover terrible deeds done during Harlan’s incapacitation.

My Thoughts: As I was reading this book, I could tell that this was an older McCaffrey title – there were old fashioned technology mentioned in it, and romantic tropes like a virgin heroine and the idea of “claiming” (I think it’s used as a sort of marriage here) that I wasn’t used to seeing from this author. Turns out this is McCaffrey’s first published book and it came out in 1967, so that explains it, and it works –  the semi-familiar tropes are more than made up for by the parts that are well thought out story building. The fantasy of waking up in a beautiful body does happen to the heroine, but rather than making her a Mary Sue, the new body makes her more interesting because of why she has one. Her flesh was eaten (shudder) by an alien race called the Mil – a race that are the Lotharian’s greatest enemy. They’re the ones who abducted Sara from Earth in the first place, and somehow she ended up in Lothar afterward, where someone performed a reviled procedure called restoration on her. The fact that she’s a restoree is a death sentence on Lothar because of the stigma associated with it.

This idea of restoration and the fact that it’s considered taboo in Lothar is a unique concept, and there are other carefully thought out ideas here that I really enjoyed, like the rules for Regency and ascendancy to Warlord or the political mapping of the world.  I thought it was a very clever concept that much of Lothar’s culture has been influenced by their war against the Mil, and they had gaps in technology because of it too. For instance, they wrote on slates, not yet on paper, but they also had spaceships and explored their nearby galaxies. The world building was well done and fed into the plot perfectly. This is not a “light” science fiction story and it has an interesting take on first encounters and alien technology and how they affect a world.

In the FAQ on Anne McCaffrey’s website it says ““Restoree” was a once-off jab at the way women were portrayed in science-fiction” and that “it served its purpose of an intelligent, survivor-type woman as the protagonist of an S-F story”.  As a heroine, Sara is smart and resourceful and she’s instrumental in helping Harlan escape and in getting back his power, but there are chunks where her role is more of an observer.  Mulling over the statement about Sara in the FAQ, I thought about Sara, and eventually I decided that I found her likable but maybe a hair idealistic. This is where this impression is from: the romance happens early and then the two are separated, so by the end of the book, when she can do no wrong in the hero’s eyes, I question it a little. I think I’m probably being a little unfair in that, but I wanted to see more of how they fell in love, and more of them together.  Anyway, this was a minor complaint. The other minor nit I had was how quickly the heroine learned the language just through overhearing it. Supposedly she was on Lothar for months so she may have subconsciously learned a lot while she was in a catatonic state, but suddenly “waking up” and understanding what people were saying required some suspension of disbelief.

) – a resourceful heroine, the hero and heroine have to work together, the hero comes from a military based society, and the concept of a Regent in this society are all there.  This was done very differently, and I think I liked the slow build in the romance in Shards of Honor a bit better, but there’s enough there for me to suggest this book for those who enjoy Bujold.

P.S. The cover.. mmm hmm. I don’t think I would have thought to pick this book up on this cover alone.

Overall: This was published in 1967. I think that makes it an old school science fiction romance. It’s an oldie but a goodie, and I recommend it for those looking for a quick read with a similar feel to Lois McMaster Bujold.

Buy: Amazon | Powell’s (I see links to used copies for under a dollar there – see “This title in other editions”) | The Book Depository

Other reviews:
Please let me know if you’ve reviewed this one and I’ll link it here!

8 thoughts on “Restoree by Anne McCaffrey”