When Bloggiesta #4 was announced I figured that since my weekends are usually lacking in plans, the weekend from the 21st to the 23rd of January would be free. Secure in my not-much-social-life, I signed up with Mr. Linky. Of course, weeks after this, my brother tells me he’s coming to NY for a wedding and plans to crash at my place. This was still not a problem for Bloggiest because dear brother said he was going into the city most of the weekend. Sounded like I’d just see him at night.. great, I can still do Bloggiesta!

My first indication that my weekend plans would not be as I expected happened when the brother called on friday. First of all, the flight was later than he initially told me, so instead of taking the train to our place, he wanted me to pick him up at JFK (easily the WORST AIRPORT in North America to have to drive to).  So. After work on friday, I spent all of an hour improving my blog before I had to drive to JFK. By the time we got home it was about 10pm. I worked for another 20 minutes on the blog, but that was about it.

Then on Saturday, instead of running off to the city with his girlfriend, the brother asked if we could all go into NYC together and check out the Natural History Museum. 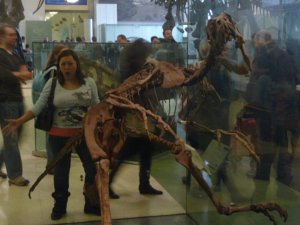 These are my brother’s pictures. I am the responsible one in my family.*cough*.

Anyway, silly times were had and also brunch was eaten (quite a good Eggs Benedict), but no Bloggiesta was happening.

I deeply regretted eating as much as I did right after eating it.

OK, I STILL pulled my laces up and worked on my blog after this! This deserves credit I say! We went to bed at 1am. I worked for an hour.

What I’ve done so far:

I didn’t really have huge goals for Bloggiesta and I’m pretty happy with what I’ve done so far, particularly when I’ve been multitasking. I also had a lot of fun reading through my old entries from the first year of having this book blog. My voice has changed a lot — my first reviews had a more enthusiastic, off-the-cuff voice and now I think my reviews are more formal and diplomatic. My reviewing has definitely evolved. There are some reviews I did that I wish I worked more on (I have a bunch of reviews when I first started where I just started using bullets), or was less snarky. I also forgot that when I first began this blog I rated the books on a scale of 1 to 10. There are quite a few reviews I reread and quite liked though. Like my review of Liz Berry’s Easy Connections and Easy Freedom. And my review of Sherry Thomas’ Private Arrangements which makes me laugh a little bit now. I was obsessed with the hero and heroine being apart for 10 years.

9 thoughts on “Bloggiesta progress — distracted but not a total loss”