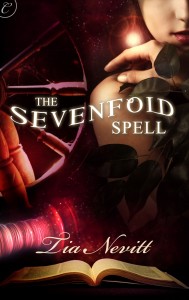 The Sevenfold Spell
Tia Nevitt
There was some buzz about this novella a few months ago, so I requested an eARC for review from Carina Press through Netgalley.
The Premise: This is a retelling of Sleeping Beauty, told from the point of view of a young woman and spinner who is affected by the curse. Talia is a plain, not very attractive girl, with limited prospects, but she has a nice relationship with Willard, a farmer’s son, and she hopes to marry him one day. These simple dreams are shattered when the princess of the land is cursed by an evil fairy, and all spinning wheels are ordered destroyed, including Talia and her mother’s. This is the end of their livelihood and, with their reduced circumstances, Willard’s father uses the opportunity to renege on his promise to let his son marry Talia. Instead, Willard is destined for the monastery.

Read an excerpt of A Sevenfold Spell here

My Thoughts: I really liked the premise of this one – an ordinary girl who doesn’t seem much, with her simple desire to marry the not-so-attractive himself Willard has her life turned upside down because of how the Royal family’s life affects the everyday people. Talia’s anger and grief over what her life has been reduced to is a palpable thing, and when she has almost no income, and she’s lost Willard, she grasps at what she can get. So before Willard leaves for the monastery, she gives herself to him, in the hope that at least she will have a child.

It is around here where the story goes from a regular fantasy tale into more erotic/steamy territory. Several trysts are recounted in detail, with Talia uncaring of Willard’s brother’s overhearing them, or of the village knowing. The creative ways they’ve found to be together are described. I don’t know if this is my prudish side coming out or just not being a fan of this much explicit sex in my stories, but this is where I sort of got bored and stopped reading. I guess I wasn’t expecting this ebook to have this level of sex in it because it was labeled as being in the “Fae, Fantasy, Legends & Mythology” category. I understood that Talia was trying to hold on to Willard in some way, but after the first couple of encounters, I got the idea and recounting all the sex didn’t seem to add much to the story.

A few months later I figured I would pick up the novella again, and once Willard has left to join the order, the sex continues. Talia is looking for a connection similar to that she had with Willard, and she enjoys having sex, so she uses her body to pay for favors from their next door neighbor, and describes getting a reputation and gives us a general idea of her numerous trysts. What kept me going was that outside of all this, there are hints of the Sleeping Beauty tale. Characters familiar to that story appear, and I wondered where it was going and how Talia fit into the story. I’m glad I kept reading because just when the story seemed to be getting darker, suddenly something happens which manages to propel the story forward into a happy ending with a twist. It all ends on a sweet note.

Overall: Not a bad way to pass the time, and at 97 pages, this is a short read and it has a unique spin on a well-known fairy tale, but it’s heavy on the sexual content, which almost kept me from finishing this short piece. I’m glad I pushed on because of the last part of this story, which had a nice twist on the happy ever after.