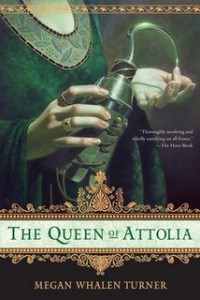 The Queen of Attolia
Megan Whalen Turner
This book may be one of the oldest books on Mt. TBR in the Janicu Household (if not the oldest), but before you admonish me for this, I stopped reading it because it was a sequel. And I didn’t buy The Thiefuntil 5 years later. This is what happens when you are easily distracted.

I think you should read the The Thief before Queen of Attolia because this book’s world and characters don’t make as much sense without the first book. There’s also one thing that the second book would probably spoil for you in The Thief.  I’m going to try to avoid spoilers in my review, but for those who haven’t read The Thief, here is my review of it:

The Premise: The story begins with Eugenides in Attolia again, using his skills as a thief to spy on the Queen of Attolia.  Attolia seems to be getting friendly with the ambassador of the Medes Empire, a nation held in check from invading the three countries of Attolia, Eddis and Sounis by treaties with greater nations, but never-the-less, they are a threat. Unfortunately for Gen, he can’t help leaving messages for the Queen to let her know that he was there, which infuriates her and makes her very determined to catch him. This time  – she does. It is not long before Eugenides and his homeland are paying for this mistake.

Excerpt from Queen of Attolia

My Thoughts: I had mixed feelings about stepping back from Eugenides in this installment of the series. He’s no longer the narrator, and I miss getting a shot of his wit from his own mouth. On the other hand, with the point of view being in third person, I can see what other characters are up to, especially the Queen of Attolia, and it makes sense to change the point of view when the story is not so much about Eugenides, as it is about the political turmoil ignited by his capture by the Attolians. And don’t get me wrong – Eugenides still feels like the main character. It is just that this time the focus is not always on him.

Luckily, the switch to third person wasn’t a hardship. As long as I had a dose of Eugenides I am happy. And I think part of me was also pretty forewarned. It turns out that I read far more of The Queen of Attolia than I thought I did before I realized it was the second book in a series. I thought I didn’t get past the first chapter, but when I was reading Queen, everything was familiar for the first 175 pages. There were elements of this story that ended up not surprising me, but which I think would be surprising to others – particularly what happens at the start of this book.

It all begins with a shocker, and a good chunk of the first half of this story is characters adjusting to what happened. Things are hard for a little while for certain characters, but there are bigger things going on. Attolia, Eddis and Sounis are embroiled in war, with the Medes Empire looking on with decided interest in the outcome. With such mechanisms going on, there’s quite a bit of plot that deals with the skirmishes between armies. The strategums employed by Eddis and Attolia are particularly fascinating, and I was rooting for one country in particular, but I have to admit that war games aren’t my favorite thing in fiction. Thankfully, while the story does cover the fighting, there’s plenty of focus on individuals to stop me from becoming bored.

Of course the individual I found myself caring most about was Eugenides, and again, he does not disappoint. I loved his role in this story, and how he manages to steal Peace, a man, and a Queen. There also a nice dash of romance in this one, although one character involved in it kept things closer to the vest than I’d fully like, it is a very, very good beginning, and I can’t wait to read the next book.

Overall: A great second installment. The focus is widened beyond Eugenides so that the changes to Sounis, Eddis and Attolia are displayed, but he still stays a central character. He may not be the same carefree boy he was in The Thief, but once you’ve fallen under the spell of Eugenides’ mix of wit and vulnerability, you’re in his corner forever, eager to see what mess he’ll put himself into next, and how he will get out of it. This book is a bit more serious than the last one, but I love where the story went and the romance we glimpse. Here is where I say I can’t wait to read the next one, but I’m already reading it.

Other reviews:
Angieville – positive
The Book Harbinger – positive
Fantasy Cafe – 9/10
Emily and Her Little Pink Notes – 5/5
Presenting Lenore – positive
Monkey Bear Reviews (spoilery) – B+
jmc_books – B+
stella matutina – 4 stars (out of 5)
It’s All About Books – positive
Dear Author – B+
calico_reaction (spoilery) – “Worth the read” with caution

17 thoughts on “The Queen of Attolia by Megan Whalen Turner”