It’s been a long week. BEA has come and gone again, and I’m still recuperating.

Approach:
This year the exhibit hall was open for 3 days rather than 2 (Tuesday through Thursday), but I only went on Wednesday and Thursday (and then Friday was the Book Blogger Convention). As it was, this was plenty! It felt like the vast majority of the authors were signing on Wednesday, although I heard comments from people that Tuesday seemed to be the day with the most YA offerings. I don’t know this for sure though. This year I’ve had less free time than the same time last year and the year before, so I spent the least time preparing. I didn’t look at the BEA schedule till the weekend before, didn’t print out any new business cards, and didn’t even take my camera. I also spent less time seeking out publicists because I’m saying “no” a lot more than I’m saying “yes” to review requests these past couple of months. So my approach was a lot more stepped back this year. The thing I most wanted to do was meet bloggers, which I did, so I think I got what I wanted out of BEA.

Buzz on the floor:
I’m not a YA blogger (so I feel out of the loop about the new YA buzz), but the YA books I saw really REALLY long lines for were for The Name of the Star by Maureen Johnson and Melissa Marr’s signing of Entralled and Darkest Mercy. I heard Richelle Mead was a big draw when she was signing at the Harlequin booth, and I heard that The Night Circus by Erin Morgenstern was another big draw. Kate (aka Katiebabs) is raving about Shatter Me by Tahereh Mafi, so that one has me interested, but I didn’t find a copy (but watch for her review, she really loved it and says the antagonist is deliciously evil yet charismatic, like an Eric from Phantom of the Opera or a Lex Luthor). Anyway, YA seems as big to me as previous years, but this year there were also a lot of middle grade books. In the SF front, there were a lot of girls excited about Mira Grant/Seanan McGuire being there (I have promised to read Feed so I can catch up on the Newsflesh series).

The Haul:
My focus was on romance and speculative fiction. This year I had a better idea of what was available for SF because I’ve learned that Orbit likes to tweet it’s in-booth signings and Tor puts up their signings on their blog, so that was good (I have to thank Kristen @ Fantasy Cafe for giving me the skinny on that). I did end up getting a lot more books than I planned to though. As usual. I have extras of things and things I’m weeding out so giveaways coming sometime soon.

Click to embiggen. Links to Amazon (I’m an affiliate). 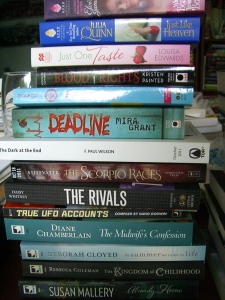 When Beauty Tamed the Beast by Eloisa James (signed. Beauty and the Beast story, I must have it), Just Like Heaven by Julia Quinn (signed), Just One Taste by Louisa Edwards (signed), Blood Rights by Kristen Painter, Dumpling Days by Grace Lin, Deadline by Mira Grant (signed!), The Dark at the End by F. Paul Wilson, The Scorpio Races by Maggie Stiefvater (signed), The Rivals by Daisy Whitney, True UFO accounts (for my dad), The Midwife’s Confession by Diane Chamberlain (signed), The Summer We Came to Life by Deborah Cloyed (signed), The Kingdom of Childhood by Rebecca Coleman (signed), Already Home by Susan Mallery (signed) 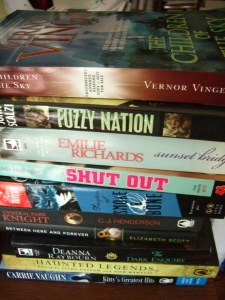 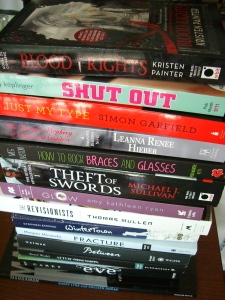