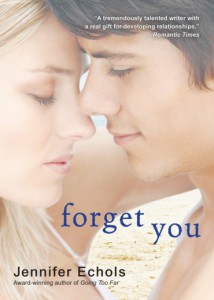 This is one of the books in that slew of Jennifer Echols books I bought, which I managed to read on the plane ride to Denmark last month.

The Premise: Zoey is going through a tough time. Her parents have split up because of her father’s infidelity (he got the twenty-four year-old HR manager of his water park pregnant), and her mom cannot cope with it. When her mother has a nervous breakdown, Zoey’s life is completely upended. Now she has to live with her father and she’s terrified that her friends will find out about her mom.

Then Zoey has a car accident. All she has is a vague recollection of Doug Fox, pulling her out of the wreck, but not much else. Now her football player boyfriend Brandon is acting weird and Doug Fox, the one person in her class who hates her, is acting like something happened between them. Zoey knows she was supposed to go parking with Brandon that night, but she can’t remember a thing.  With little she can control, Zoey pretends that everything is okay while secretly trying to piece together exactly what happened the night of her crash.

Excerpt of Chapter 1 of Forget You

My Thoughts: This is a book where it’s pretty clear from the get go that while Zoey is a good kid, the strain of dealing with her parent’s fighting and her mother’s depression is something she’s having a very hard time dealing with. The story opens up with a prelude: Zoey driving home after finding out at her father’s water park that he got an employee pregnant. Since Zoey helped get most of her swim team get jobs there, they all know too. Unable to talk to anyone about what’s going on, she does something rash, but this time there are no dire consequences. But her rashness here proves to be the beginning of a pattern for Zoey – one in which her her hidden turmoil makes itself known in self-destructive ways.

Fast forward to the present and Zoey gets hit with the blow of her depressed mother’s hospitalization. Zoey has to move in with her furious dad, who wants her to keep her mouth shut about what is going on. The only people outside their family who know are Officer Fox and his younger brother, Doug. Zoey is appalled about this, since Doug’s given Zoey nothing but a hard time ever since his stint in juvie. His dislike doesn’t improve after she got everyone in the swim team a job at the water park except for him.  Rather that confiding in any of her friends, and studiously avoiding Doug, Zoey starts a relationship with uncomplicated jock Brandon. But within a week she’s in an accident, wondering why Brandon is acting strange and guilty, and why Doug is suddenly soft-eyed around her. Zoey can’t remember the night of her accident and she’s afraid to admit she can’t, so she pretends, again, that everything is fine, while secretly scrambling to figure it out.

I really liked Doug’s character in Forget You, because he’s essentially this guy who really tries to looks out for Zoey and has her back even when she doesn’t want it. You have to give the boy points for being pretty much the only person, including her missing-in-action parents and her clueless friends, who seems to spend any time worrying about Zoey. As together as Zoey usually is, no one really knows she needs help except Doug. Now, Zoey doesn’t exactly welcome his interest, mostly because she can’t really remember what happened the night of her accident and doesn’t know why Doug suddenly cares. I’ve read reviews where readers don’t like how Zoey treats Doug, but I found her reactions to him believable. Yes, she hurts him, but with all that she’s dealing with, and with her past history with him, she has reasons to be mistrustful and generally unhappy. She also thinks that she is with Brandon. I liked how their relationship progressed throughout the book despite it being rather rocky.

I feel like Forget You has the same engrossing writing that is in Going Too Far, and there’s a similar intense relationship, but while I thought it was very good, it didn’t blow me away the way Going Too Far did. It’s not that I didn’t like Doug and Zoey as much as I liked John and Meg. I did. I think the problem that kept the book from giving me the same reading high was that the story hinged on believing that Zoey would keep the fact that she can’t remember the night of her accident a secret. I had a problem with holding my disbelief at bay when it seemed like life would have been so much easier for her if she admitted she couldn’t remember, and basically the whole premise falls apart without this. That’s the only fly in the ointment for me. Otherwise I felt that Doug and Zoey were complex, layered individuals, and I liked them as a couple. I particularly liked Doug’s Being There For Zoey persona. Although he did sometimes feel unreal, his crappy relationship with his father, and his missteps with Zoey stopped him from being perfect.

Side note: I also liked that Doug was half-Japanese, although his green eyes gave me serious pause.

Overall: Very good. This book portrays the intense connection of young love and the strain of being a teen going through troubled times very well. The writing is engaging and it’s easy to compulsively flip the pages until you are finished. However, it does have it’s flaws. My biggest one was suspension of disbelief at the idea of a girl hiding the fact that she can’t remember the night leading up to her car crash, which kind of makes the whole premise, and everything after that, unravel. Readers may also have issues with Zoey’s treatment of Doug and her methods of escaping her situation. Your mileage may vary.

8 thoughts on “Forget You by Jennifer Echols”