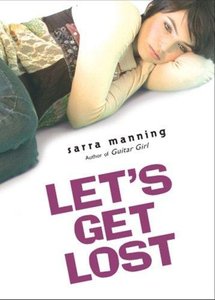 I loved Sarra Manning’s adult offerings quite a bit, but I had not (until now) tried her young adult books, which I’ve also heard good things about. I bought many of her backlist in a glom-fest a couple months ago and grabbed Let’s Get Lost for a plane ride from NY to AZ.

The Premise: Isabel is a troubled kid. She’s the Queen of the Mean Girls at her all-girl school, and there seems to be no particular reason for her reign of terror. No one can reach her, even after her mother’s recent death. Girls expecting a softer Isabel at school at the start of her last year are disappointed by an Isabel that is just as cold as ever. That is how it looks on the outside. Internally, Isabel feels stuck. She decided to be mean in high school because she was bullied and insignificant in middle school, but now she can’t afford to relax her facade. Her crew aren’t really her friends and are constantly waiting for a slip. That’s when a chance encounter with college-aged Smith comes in. He doesn’t have expectations of what Isabel is like, and when she’s with him, she can be herself. That is, except for the fact that Smith doesn’t know Isabel is still just 17 and still in high school.

Read an excerpt of Let’s Get Lost here

My Thoughts: Of the three Manning books I’ve read so far (Unsticky, and You Don’t Have to Say You Love Me are the other two), Isabel is the most difficult character to like as a reader. The girl is no angel. We see Isabel at school, keeping her cohorts and other students in line with well placed verbal bombs, guaranteed to make the recipient squirm, and at home she bulldozes and back talks her frustrated father. Whenever she can, Isabel is out at clubs, stealing drinks off tables to get drunk, and pretends to be older than she actually is. Flanking her are three girls who she doesn’t like, who don’t like her, and who are just sticking around for the power and protection of their alpha girl group.  I think that if you can’t forgive Isabel for her many mistakes and nastiness, this story will be a difficult one to enjoy, but with Isabel as the narrator, at least we get an explanation for her actions, and we know that she doesn’t particularly like herself or what she’s doing. For me, it was a case of understanding why she acted the way she did, but not condoning it.

Smith on the other hand, is a much more sociable character. An easy-going guy with lots of friends, he accepts people as they are, including Isabel. The pull of this story for me was seeing the effect that being with Smith had on Isabel. For Isabel, being with him is like being on vacation as a normal teenager, not a girl constantly on guard. That side of her made me hope that somehow she could find a way out of her rut as Let’s Get Lost progressed. It was clear that Smith was a catalyst on Isabel’s life, but I wasn’t sure if he’d be a source of strength, or a point of weakness. On one hand Smith is a relief from the constant scrutiny Isabel deals with from school and her dad, but on the other, I wondered at the consequences of her lies, both to Smith and to everyone else about Smith.  I wanted Isabel escape the hole she’d dug for herself.  Throughout her narrative, you can feel Isabel’s underlying sadness. It’s like she has a dreamworld where Smith belongs that she’d also like to be, but she doesn’t believe she can attain it.

“My whole life had split into two: Smith and not Smith. I liked the Smith parts of it so much better. Already I was calculating how much of the weekend we had left and greedily clutching every hour to me as if it was precious. Was this what it was meant to feel like when you were really into someone? Was this what it felt like if you were in love?
As soon as I thought it, I knew that it was true. I kinda loved him. Or, like, I was in love with him. Either state of being was just too freaky to contemplate. The dripping toothbrush stilled in midair as I tried to pull myself together. I was a heartless, ungrateful wench of a girl who promised everyone who came into contact with me a one-way ticket to pain and hurt. I didn’t know how to love and I didn’t deserve to be loved back.”

If you’re wondering where Isabel’s parents are in this picture, her mom died pretty recently, and her father, (coincidentally a professor at the university Smith attends), is still devastated by the loss. Unresolved issues about her mother’s death hang in the air between them, and Isabel’s father ping-pongs between not being quite there, and being positively draconian. I really liked the complexity and imperfections of their relationship, and I liked that they share a prickly outside and high intelligence, which only leads to their butting-heads even more. This was refreshingly true-to-life. Also refreshing: that this was a Young Adult story that deals with the consequences of someone’s actions in a realistic way. There is no convenient lack of parents or neat resolution that absolves the teenaged protagonist of their sins. Isabel has to bear the reactions of others for what she’s done. And her mother’s death is an event that has it’s own consequences which Isabel has to deal with too.

Overall:  This was another good one but you have to work a little bit for it. The narrator does some unlikeable things, and that along with the high wall she’s built around herself makes her difficult to empathize with at the beginning, but as the book went on, it became easier to understand Isabel and what is beneath her mean girl veneer. It is well worth it to be patient and see where Isabel’s path leads, but if you can’t bring yourself to forgive her her misdeeds, this book will be more difficult  to enjoy. I found an unhappy girl who wants a different life under there, and the story doesn’t let her off easy – her actions have consequences that she must face. If you want a great story that deals with redemption, loss, first love, and teenage rebellion, Let’s Get Lost has it all. After reading it I have this sense of having returned from being in someone else’s headspace with a little bit more insight than I had before.

Other reviews:
About Happy Books – positive

5 thoughts on “Let’s Get Lost by Sarra Manning”