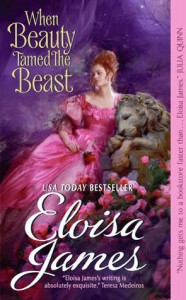 When Beauty Tamed The Beast
Eloisa James
Eloisa James is an author I’ve never tried before, and I have to be in a certain mood to read a historical romance, but when I heard that When Beauty Tamed the Beast was a Beauty and the Beast retelling, and the hero is a nod to Gregory House, I had to get it. This was a book picked up at BEA.

The Premise: Linnet Berry Thrynne is incredibly beautiful but rather unlucky of late. After being caught kissing a prince, she’s shunned by high society and rumors fly that she’s pregnant. The prince who was once so attentive doesn’t stick around to dispel the nasty whispering, so to regain some control of the situation, her father and aunt devise a scheme for Linnet to regain her reputation by marrying Piers Yeverton, the Earl of Marchant. Piers’ father, the Duke of Windebank is desperate for an heir, and a woman pregnant (by a prince no less), would be the perfect thing for his son. All that needs to be done is for Linnet to charm Piers into marrying her, so she goes off to his castle in Wales, but when the man is known as Beast because of his vile temper, of course he’s going to be a challenge.

Read an excerpt of the first 3 chapters here

My Thoughts: So I was in the mood for a plain ol’ fun romance without too many complications and this fit the bill. I noticed that there was a blurb from Julia Quinn in the front inset cover and I think this is was a good choice. Both authors inject enjoyable humor into their historical romances that is sort of in the same type of vein (though I find James’ a bit more situational and Quinn’s more about the dialogue).

With Piers, as the Beast, modeled after House, I was expecting a lot of angst, but surprisingly, there was less than there could have been. Yes, he walks with a painful limp (caused the same way House’s was), has issues with his father, and he is very moody and abrupt, but I didn’t feel like Piers was truly beastly in the way the Beast was in the original fairytale. He’s a doctor and his anger is mostly for ineptness and fools who kill their patients. I didn’t feel like he really needed redemption (although, perhaps his father did). When Linnet first meets Piers, she thinks him a bully, but moments later, they’re getting along quite well:

They reached the stairs leading down to the main floor. “If you want to keep holding onto me, you’ll have to move to my left side,” Marchant said. “Though, of course, there’s always the possibility that you could descend the stairs all by yourself.”
Linnet moved to his left side, just to irritate him. She curled her fingers under his arm this time. She rather liked all that muscle under her hand. It felt as if she were taming a wild beast.
“I suppose you think I’ll fall in love with you,” he said.
“Quite likely.”
“How long to you give yourself?” He sounded genuinely curious.
“Two weeks at the outside.” And then she did give him the smile–dimples, charm, sensuality and all.
He didn’t even blink. “Was that the best you’ve got?”
Despite herself, a giggle escaped, and then another. “Generally, that’s more than enough.”

Linnet herself is used to men falling for her very quickly based on her looks, but she has the brains to go along with it. This means she usually finds herself with men who are smitten but unable to keep up. With Piers being rather impervious to her charms and rather tetchy about it, I think Linnet is actually delighted to find someone with which she doesn’t have to hold herself back.

Since Pier’s is not so easily beguiled by Linnet’s beauty, she figures that that’s the end her scheme to get him to marry her. On Piers’ side, he isn’t willing to marry a woman his father picked out, no matter how lovely she is. The two settle into what they think is an amicable relationship based on that, and even start a daily routine. Piers begins to give Linnet swimming lessons in the morning, and Linnet begins to take an interest in the hospital that Piers runs at his castle. While there are parts that strain credibility (Linnet getting into this situation in the first place, the swimming lessons), I was able to overlook these and just enjoy the story.

The romance kind of grows of it’s own accord as the days pass. There are subplots that have to do with Piers’ family history (when his mother arrives at the castle, that ignites some drama with his father), and with Linnet’s improvements to the hospital (I could have done without these, but I guess she had to have something to do all day). The real drama happens towards the end of the book, and it is not your typical Big Misunderstanding or Bad Guy suspense plot. I liked the unique way this one brought up the suspense and added difficulties to the romance before the HEA.

As Beauty and the Beast retellings go, this was very loosely based. If I were pressed about it, I could make arguments that “her father sent her to the beast in his stead” sort of happened, and that the traditional ending sort of happened (with a twist), but mostly the biggest similarity was that Linnet is a Beauty and Piers is the Beast. I thought that the similarities with House where much greater, with Piers stomping around with his cane, brilliantly diagnosing patients with his team of doctor-students.

Overall: Good. There was nothing that I actively disliked about it, and there were was plenty to like – humor, unique characters, plot, and setting (I particularly loved the seaside pool). Logically, I would call this a fun book, but viscerally, I feel strangely neutral about this story. I am not sure if this reaction is due to my mood, or because I’m not usually a historical romance kind of girl, or if it’s something else. I can’t put my finger on it. I do recommend it for historical romance fans though.

Other reviews:
Giraffe Days – positive
The Good, The Bad, and the Unread – A-
Dear Author – A-
Babbling about Books, And More – A-

6 thoughts on “When Beauty Tamed The Beast by Eloisa James”