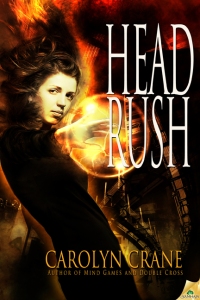 Head Rush
Carolyn Crane
Head Rush, the final installment of the Disillusionist Trilogy, has been one of my most anticipated reads of last year. The ending of the second book made me want this book stat, but I couldn’t find a publish date. Then I learned that Bantam was not publishing it! Ug! Thankfully, Samhain saved the day and published the last part in December (eBook December 2011, print to follow). If you like urban fantasy, this is a good series to try, and it is contained in just three books. There’s also a standalone novella (and I think a second one was announced), but told from the POV of secondary characters. After reading this last book, I didn’t feel like you had to read the novellas to follow the overreaching arc of the main story.

Standalone Novella: Kitten-tiger and the Monk in Wild & Steamy anthology

**** Because of the way book 2 ended, I can’t review Head Rush without referring to it and spoiling the earlier books (I’ll be shifty in The Premise, but I can’t stay shifty in My Thoughts), so check out my reviews of Mind Games and Double Cross instead ****


The Premise: After witnessing a traumatic event a few months ago and learning a thing or two about someone she once trusted, Justine Jones has moved on. What she always wanted is within her grasp. She’s going to nursing school, she’s engaged to the man of her dreams, and her life has settled down – no disillusioning, no zinging, no running into danger. Instead, her life is regimented and protected under the wing of the most powerful man in Midcity. Trouble is, something doesn’t seem to be quite right. Justine chafes a bit under all her protections but her fiance is anxious to know where she is at all times. In the meantime, her friends Simon and Shelby are acting odd around her. It’s as if everyone around her knows something she doesn’t, and they’re tiptoeing around her because of it.

My Thoughts:  In Mind Games and Double Cross, we’re introduced to the world of Midcity, where highcaps and disillusionists roam. Justine becomes one of the disillusionists under the leadership of Packard, and as the story progresses, she learns about Packard’s greatest enemy and former friend, Otto Sanchez. Everything seemed to revolve around these two men and their differing approaches to protecting their city. Packard works in secret and out of public eye; his Disillusionists doing his work for him, while Otto is the dashing police chief turned mayor, and he is the darling of the city. Both these men are powerful highcaps, both are the city’s defenders, and both are in love with Justine. What I found really gripping about all this is for Justine, it’s difficult to tell which of these two is the good guy and who is the bad guy. Trying to figure it all out, Justine finds herself going back and forth in her allegiances as she learns more about each of them while chasing after murdering highcaps herself.

Head Rush has a different vibe from the previous books because not only is Justine no longer disillusioning people, but Packard and Otto have finally shown their cards. At the end of Double Cross the reader knows who has crossed the line and can never come back, and who has redeemed himself. The problem is, Justine doesn’t know what the reader knows, thanks to the present tense narrative and a well-timed memory wipe. Instead of the suspense being about Justine trying to disillusion a murdering highcap or looking for a band of highcap killers, it’s about whether Justine will figure out the truth. Because of that, this book lacks that episodic mystery element that the other books have, and is more about “how and when will Justine find out that someone manipulated her memory”.

I think that having Justine get her memories tampered with was an awesome plot twist in the second book, but in the third book, having her slowly figure out what happened restricted the story somewhat. There’s a lot of mundane wedding planning going on, with her best friends giving each other significant looks, but while Justine’s senses are tingling, she’s still utterly in the dark for a big chunk of the story. It was a little frustrating to watch Justine stumble around until she learned what we already knew, but I don’t think there was any other way for her to learn the truth and be convinced of it. So in my mind, it had to happen this way, frustrating as it was to see Justine and Otto together knowing that they are so wrong for each other. I found myself looking forward to Justine finally figuring things out so that the story could move to the next phase, which involves confronting Otto for what he’s done. When we get there, it is as nail biting as I hoped, and the story ramps up in complexity from that point.

There were a couple of characters were mentioned in the earlier books who finally make an appearance in this one. They are Justine’s father, and Fawna, the highcap seer that Packard and Otto knew as children. I was expecting someone on the crazy side for Justine’s dad, but I ended up adoring his relationship with his daughter and the way he stepped up to support her. Fawna is a more enigmatic character, and extremely hard to read, but I had the feeling she had an unyielding personality because of her precognitive abilities. I wouldn’t mind learning more about her, but there wasn’t room for it in this story.

As for Justine’s friends, they are as well-written as ever. Towards the end of the book, Justine’s emotions about them were palpable. There were a lot of moments where Justine’s awareness of the people around her were sharply defined. It was a great finish to the series, and a emotional one. I don’t think I expected how profound that ending would be. And the romance, what a heart-wrencher, in a “their love moves you” kind of way.  It was so good, but I still wanted for more scenes between Packard and Justine. What there was, was amazing, but confined to a couple of brief exchanges and a couple of intense scenes. I seriously resented Otto for keeping these two apart, but the character development is so well done that even Otto gets my sympathy.

Overall: A great ending to one of my favorite urban fantasy series. The Disillusionment Trilogy feels incredibly well thought out. From the characters to the world, time and again, I was impressed by those little details that offered more insight to the story.

Other reviews:
My World…in words and pages – “wonderfully done”