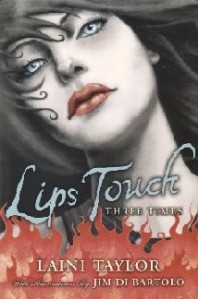 Lips Touch, Three Times
Liani Taylor
This is a trio of fantastical stories that involve a special kiss. Each story infuses fairytale elements with pieces of culture from across the globe – one is a nod to Christina Rossetti’s “Goblin Market“, another at Zoroastrianism, a third at the British Raj and the hell that Orpheus braved for Eurydice. The bonus is artwork that was created by Jim di Bartolo at the beginning of each story (pictures that show us the past–before the story we’re about the read begins), followed with one picture to leave the reader with a parting image.The initial capitals at the start of each chapter, the decorated end pages, and the inverted corners of the illustrations are details that made Lips Touch, Three Times a very beautiful book, the kind you’d want a physical copy of for your very own.

I bought a softcover edition of the book and compared it to the hardcover at the store – it looks like all the pictures are there and with the same colors (a combination of black and white, and pink). The only complaint I’d have is that I like the hardcover cover better than the paperback one. It’s an illustration by Jim di Bartolo which ties in with the inside better than this generic photo focused on some glossy lips (meh), but I like paperback over hardcover so that’s what I got.

Goblin Fruit: Kizzy belongs to a huge, weird family that lives on the edge of town and still believes in the Old World ways. Ghosts come to visit their house and the men hunt and do “things involving axes and offal” to turn their kills into meals. Kizzy is sixteen and embarrassed by their strange customs and beliefs. She hears the story her grandmother tells her about the goblins and her great aunt Mairenni, but she doesn’t hear. Goblins with magical fruit so good that girls would trade their souls for another bite are the stuff of fairytales to her. Which is unfortunate, because Kizzy is the type of girl that the goblins go after, a wishful girl with hungry eyes. When a preternaturally beautiful boy named Jack Husk shows up at school, no warning bells go off.

Although this story had the most ambiguous ending, this may be my favorite story. Yes, I am usually a HEA kind of girl, but I recognized Goblin Fruit as a cautionary tale, which made Kizzy’s fate more palatable. I also liked the modern feel of this story, with Kizzy going to high school and having conversations with her friends about boys and speaking in that easy, flippant way girls who are best friends often do. I liked that. The contrast between the teens and the fairytale they stumble into reminds me of the writing of Holly Black.

“Kissy! You just mingled saliva with the most beautiful boy ever to tread the hallways of Saint Pock’s. Saliva. There’s DNA in saliva.  You’re, like, carrying his cells in your mouth like one of those weird frogs that incubates its eggs in its cheeks!”
With a squeal, Evie added, “You could have his mouth baby!”
“God! Only you guys could make his saliva sound gross. I mean, did you see how perfect?”
“Oh, I saw,” said Cactus. 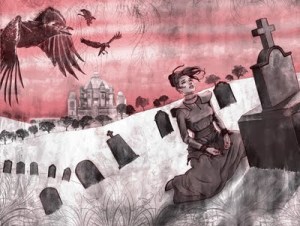 Spicy Little Curses Such as These: In British-ruled India, there is an English woman who goes down to Hell every week and bargains with the demon Vasudev for the lives of children. In exchange for the children, some adult with an evil soul would expire early. Every so often Vasudev would make things more interesting, and this is the story of what comes of a bargain where the newborn daughter of the Political Agent is cursed by one of their bargains. The girl, Anamique, was cursed with a voice so exquisite that all that hear it would promptly drop dead.

This is a romantic story where the suspense hinges on whether or not Anamique has the willpower to continue to be mute and spare those around her, even though only the servants believe her curse and her family does not. Anamique has a rich inner world but it’s a lonely life. Her downfall may be when she’s finally noticed by a young soldier named James Dorsey who finds her journal on the train, reads it,  and falls for with the person who wrote it. I loved how this story’s Indian setting felt like I was reading a beautiful dream of the past. Out of the three stories, I thought this was the sweetest and the most straightforward.

James cajoled an old missionary’s wife to take a turn at the piano at the end of the evening, so that he might have the chance to dance with Anamique.They touched for the first time, first delicately and decorously, fingertips to waist and hand to shoulder in the pose of the dance. But by and by James’s lips brushed softly against Anamique’s earlobe as he whispered something to her. She blushed furiously at the intimate touch, and a look of wistfulness and hope came into her eyes.
“I love you,” he had whispered, and it seemed to him as she pressed her lips together, that she was imagining whispering it back.

Hatchling: Esmé and her mother Mab live in their own separate world. Esmé has never been to school nor does she or her mother have friends or family. They live like fey creatures off of money they get when they sell diamonds a mysterious benefactor sends them in the mail. Then one day, Esmé’s left eye turns from brown to blue, and she hears wolves. That’s when they hastily throw together some belongings into a couple of violin cases and flee from her mother’s nightmare – the Druj. Watching over then until this moment is the exile Mahai, and he has plans for Esmé. The past of Mab, Mahai, and the druj is interwoven with the present in this story that centers around a race of immortal shapeshifters with no memory of their history.

Of the three stories, Hatchling is the longest, and with it’s shift from present to past, from one person’s history to another’s, it is probably the most complicated story. Before I started reading this, I had a couple of people comment that this was their favorite. I think in terms of the way things ended, all the pieces fitting together neatly and satisfyingly, I understand why this is a fave. This has elements of the Celtic fairy tales with dark Fae creatures who make mischief, turn into hounds and go on hunts, and keep pet trolls. I also felt like this was a story about memories and legends and things that were forgotten and then remembered. I liked this story, but the length and the shifting focus gave it less of an impact as the earlier stories in my mind. I also think expectation played a role here because we begin the story with Esmé, but the middle is about Mab, and the end is about someone else.

The forests belong to the Druj. Everything in them belongs to the Druj and the Druj are supposed to stay there — agreements had been made — but sometimes boredom gets the better of them.
Boredom is a terrible affliction of the soulless.
Every village in the foothills of those varied mountains has its tales of Druj stalking among them. They come as crows and owls, foxes and magpies, stags whose antlers carry the moss of centuries, and wolves, huge and hunched, padding silently through the center of town. Whatever cithra they keep, their eyes are always the same, that desolate blue, and that’s how humans know them.

Overall: A strong trio of stories and a keeper. I think the author says it best when she describes herself as “a magpie […] a scavenger of shiny things: fairy tales, dead languages, weird folk beliefs, fascinating religions, and more”. These are stories that all feel like the children of other stories, but they’ve all been heavily infused with an air of the romantic. Reading this feels like discovering a room filled with whimisical, fantastic treasures accumulated over a lifetime by a rich French eccentric who liked pretty things (Yes, I just linked two such cases – it’s a thing).

Other reviews:
Fantasy Cafe – overall score 9/10
Chachic’s Book Nook – “highly recommend to all fantasy fans” (she also quotes one of my favorite passages!)
Stella Matutina – 3.5 out of 5 (“prose is dark yet sweet; intricate yet accessible”)
Book Harbinger – “Lush, imaginative, beautiful in every way and extremely well-written”
Lurv a la Mode – 3 scoops out of 5 (“Despite not fully enjoying all the stories, I am in awe of the author’s imagination and skill”)