The Raven Boys was chosen as December’s YAcker read. You can check out our discussion here. 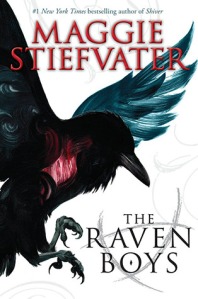 The Premise: Every psychic Blue Sargent has ever gone to tells her the same thing: if she kisses her true love, he will die. Other people might dismiss such claims, but Blue lives in a house with her mother Maura and a group of women who are in the business of telling fortunes, and she knows how accurate their readings can be.  Blue’s fate has hung over her head for much of her life, but when her aunt Neeve joins the household, she gives Blue a timeline. This is the year that Blue is going to fall in love.

If that isn’t a grave enough portent for the year, Blue also sees the spirit of a boy during St. Mark’s Eve, when the soon-to-dead march through the grounds of an abandoned church. The boy whispers that his name is Gansey. Blue has no psychic powers of her own (she only magnifies what others see), so seeing Gansey has one of two meanings: either she is responsible for his death, or he is her true love.

In the meantime, Richard “Dick” Campbell Gansey, III (Gansey to his friends) attends the nearby Aglionby Academy. Outwardly he has the ease and confidence of the rich and privileged and he leads a gaggle of Aglionby misfits: Adam, Ronan, and Noah. But inwardly, Gansey is more than he appears. He’s a finder of lost things, and he’s searching for something in particular, something ancient and magical: Glendower, a sleeping king who will grant a boon to whomever wakes him.

Read an excerpt of The Raven Boys here (pdf)

“I should tell you,” Maura always advised her new clients, “that this reading will be accurate, but not specific.”
It was easier that way.
But this was not what Blue was told. Again and again, she had her fingers spread wide, her palm examined, her cards plucked from velvet-edged decks and spread across the fuzz of a family friend’s living room carpet. Thumbs were pressed to the mystical, invisible third eye that was said to lie between everyone’s eyebrows. Runes were cast and dreams interpreted, tea leaves scrutinized and séances conducted.
All the women came to the same conclusion, blunt and inexplicably specific. What they all agreed on, in many different clairvoyant languages, was this:
If Blue was to kiss her true love, he would die.

The Raven Boys begins with a sense of anticipation. The first chapters follow Blue and Gansey separately, but because of fate, Blue’s curse, and St. Mark’s Eve, the reader knows these two characters are meant to cross paths. Blue sees a boy’s spirit whispering the name Gansey, and sitting on a ley line on the other side of town, Gansey picks up the very same conversation on his recorder. Obviously Blue and Gansey are part of a bigger mystery, a mystery that they can only see the edges of from different angles.

Blue was born into the strangeness in Henrietta. She is working class and lives surrounded by women who tell fortunes and are well aware of the ley lines that make her town special. Gansey couldn’t be more different. He was born into privilege and has never experienced life without the ease that money brings to it. Despite this, he leads a pack of misfit boys at Algionby academy and has an obsession with mystic phenomena and a king named Glendower. In spite of their differences, Blue and Gansey’s lives hold some parallels. Mystery swirls around them and they share their lives with people that hold secrets. While Blue lives with her mother and older women named Calla, Persephone, and Orla (in a set-up that doesn’t seem to be unlike what I imagine a coven to be like), Gansey lives in the husk of an old factory with a couple of boys that don’t fit anywhere else.  Her mother and her surrogate aunts warn Blue about kissing boys and avoid discussing Blue’s absent father. Gansey is is leader and support for his friends but there’s a line he can’t cross that keeps Noah elusive, Ronan surly, and Adam defensive.

I liked the way things were set up in this story: Blue’s world about to collide with Gansey’s. Wondering what would happen when these two finally meet had me turning the pages eagerly. Unfortunately, somewhere after the initial set up and the actual crossing of paths, something happened. I never felt fully captured by the story in the way I wanted. It took me a long time to parse out what happened there. My reaction was frustratingly in the middle-of-the-road, and I couldn’t help comparing it to my fellow YAckers who mostly loved the book. I know that reading is a personal experience, subject to mood and a myriad other factors, but while I knew what I liked, I couldn’t pinpoint what kept me from wholeheartedly loving The Raven Boys.

Cut to over a month later, some angst over separating my reading experience from the end of a stressful year, a reread of The Raven Boys, more angst, and I think I have a better idea of what my problem was. Technically, this should have been a winner: the writing is engaging and of good quality; there’s a mishmash of eccentric characters; and the main story centers on mysteries that reveal themselves in slow degrees. Individually each character had his or her own fascinating back story. But for me, some of these strengths also translated into weaknesses. Everyone had some personal albatross: Blue with her curse and her unknown father; Gansey and his obsession for which there is no explanation; Ronan’s father’s death and his subsequent broodiness; Adam with his poverty, pride, and miserable home-life. Even Noah, who is practically a non-entity at the start of the book turns out to be more than meets the eye. On top of that, the antagonist of this story has his crosses to bear. My problem was with so many complex/tragic/secret back stories, the focus felt fragmented. Blue and Gansey took the spotlight the most, but I felt like I was focusing on the other characters through them instead of focusing on them. I’m all for characters having depth, but when there’s a mystery or tragedy to everyone, it felt like too much to me.  You could argue it all links back to the phenomena surrounding Henrietta, but (for me) it created an imbalance. Every issue I had stemmed from this central one. The pacing in the first 150 to 200 pages feels meandering, and the narration hops between characters for some time before something vaguely plot-like appears. I think Gansey and Blue were the protagonists of this story, but I question if that assumption is correct. Then when the pace picks up and the story gathers focus, I felt like certain things like Blue’s acceptance into Gansey’s group didn’t get the attention I wanted. It took me longer than necessary to finish The Raven Boys because I felt adrift.

On the other hand – did I like these characters? Did I want to know what was happening to them? I did. The characters that I loved most are the ones where veil is pulled back a little more in the narration. When that happened, oohh, that’s when I adored this book. That’s why I think I have more of a soft spot for Blue, Gansey, and Adam than the rest of this group. We’re shown Blue’s prickliness towards the raven boys, and Adam’s self-consciousness about being poor, and Gansey’s good intentions that never seem to go right when he deals with either of them. I was half-irritated with Adam’s pride until I came to a realization that his parents failed him when they instilled an us-versus-them mentality in him (which really covers their sins and did Adam no favors), and I was kind of blown away by that epiphany. And then there’s this sweet fledgling maybe between Adam and Blue. It made me hope, but also fear a little, because thrown into the mix is Blue’s curse that points at Gansey. Everything in this story is so fragile and so breakable, and there is no certainty. I’d very much like to find out what happens next.

Overall: There were things I really liked about The Raven Boys and things I really didn’t and they balanced each other out. If you are one who can sit back and enjoy a character-driven story with lovely prose and you don’t need to know where it’s all going, this will do quite well. I think that I needed more structure though. In the end I enjoyed the characters more than the plot. But now that the set up is done, I think I’ll react better to the second book, so I’m planning to continue the series and I’m really looking forward to The Dream Thieves.

9 thoughts on “The Raven Boys by Maggie Stiefvater”