I got a review copy of The Domino Men recently from Eos Books. I'd never read anything by Jonathan Barnes before, and I went into this story without knowing what it was about. I think that's the best way to start this book, because my first impression was the same as the main character's; I had no idea what was going on. Even fifty pages in, I was still puzzled.  There was only hints here and there from the strange events in protagonist and main narrator, Henry Lamb's life, of evil looming over London, and nothing being exactly what it seems. Although Henry's life seems a bit boring at first, working as a filing clerk at the Civil Service Archive Unit, it's clear from the get go that something is going to happen. His narrative begins with:

"I simply have to hope that there'll be time enough for me to set down my own story, or at least as much of it as I can remember before the thing which sleeps inside me wakes, stirs, flexes its muscles and, with a lazy flick of its gargantuan tail, gives me no alternative but to forget."

Pretty ominous, eh? To make things more interesting, his narrative begins to get interrupted by another, conflicting voice, something that takes over Henry's consciousness and describes what's happening elsewhere. What ends up happening is that the reader gets completely caught up in the story. One crisis quickly follows another and clues to the big picture only comes in bite size pieces. There's the Directorate, a covert government group that is fighting something terrible that threatens London and all her citizens. They are very interested in Henry, for reasons that aren't immediately clear. Then there is Henry's grandfather, a man hated by this family except for Henry, and who is in a coma. He holds a lot of clues to Henry's current predicament. Surrounding all of this is a cast of oddball, sometimes supernatural characters, playing a long term game with London at stake.

The words that I kept using to describe this book to people was "creepy" and "disturbing", but it affected me like the way cartoon violence does; you're insulated by the vagueness and by the fact that you're reading a book. There is also some humor in the writing and tone, which keeps it from being truly scary, at least to me. I also had a good time recognizing paths that were likely going to cross and paying attention to all the foreshadowing. Certain minor details never really get explained, which I chalked up to atmosphere. It's not for everyone, but if you have a decent tolerance to sometimes gross events, and you like dark humor, you'll probably find this an enjoyable read. 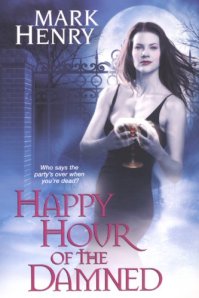 My stupid laptop died with a fan error. I believe this makes it.. mmm 8 times I've had a laptop die. And each time, my reaction gets smaller. I barely even blinked this time (I have backups burned. Highly recommend backing up your things. Let this be a lesson). I find using this backup desktop annoying though. I can't pick this up and carry it around.

I wanted to post this review with a picture of my ARC and cover flat but yeah, the laptop death means I'll have to do that later. They look so pretty together. The cover is in a matte finish, I love that. This book comes out in trade paperback format on March 2008.

I won this book and the author is on my livejournal friendslist, so I was a bit nervous when I first saw it. I would feel weird if I didn't like this book. I wouldn't be able to lie about things I didn't like. So when I started reading, I was smiling – this book is awesome! I don't think I've read anything like it, mostly because of the main character.

The book reads like a memoir told from the first person viewpoint of a snarky-as-hell, newly-undead, fashionista socialite named Amanda Feral. An advertising executive with a tendancy to mock every single person she meets (if not out loud, in her head), she and her friends spend their time in one nightclub or another drinking and gossiping in Seattle. It's a pretty superficial existence, but fascinating to read about and picture – the nightlife of the undead in Seattle from the viewpoint of a newcomer like Amanda is chock-full of revelations. One in ten Seattle resident could be a werewolf, zombie, vampire, shapeshifter, god, demon or other, but humans take no notice as the supernaturals (including Amanda), prey on their numbers.

Amanda feasts on runaways and homeless people in a gorey way – unhinging her jaw and eating them in a few bites.  There's talk of blood spatter and intestines. The woman is brazenly un-P.C. She barely feels guilt for her kills or methods of luring people in, it's like a fun game most of the time, and I'm pretty sure she has something offensive to say about every subset of the population she encounters. And yet, she's so up-front and over the top about everything she ends up being quite funny and likeable. I thought that if the two ladies of Absolutely Fabulous became zombies, this is the type of book you'd get out of it. This book just did dark humor really well. My two favorite things:

1. Amanda has OCD and has a thing for lists, and she peppers her story with footnotes, which are just asides for things she's saying in the narration. My favorite one is number 50 on page 101. Not sure the numbering is going to be the same in the final so let's say second one on chapter 9:

"In high school – nasty old barnaby Ridge – I had been a lonely girl." The footnote for this sentence begins - "If this comes as a surprise, then you have overlooked the fact that I am a total bitch."

2. The crux of the plot – Amanda receives a text from a friend saying "help!". But Amanda despairs about her group's usefulness. "How are we going to help? Not a caring nurturer in the bunch". A gay vampire and two socialite zombies, they freak out despite their supernatural powers. When they discover that their friend is missing, they immediately seek the comfort of food and its a couple of days before Amanda starts looking into things. I'm not sure they're meant to be the bravest bunch, but they're the most.. something.

The story meandered around a bit, I think a testimony to Amanda's nature. I liked the unpredictability. There were little side stories told by Amanda's friends about their beginings, which Amanda titles the Inconderate Interludes of the Bitter and Pathetic, and  random insets from Amanda regarding DJ playlists and alcoholic drink recipes. And there's doubling back to add a confession or get back to the point.

You never know what is going to happen. I think the writer had fun and threw a couple of things in there to waylay the reader. Some big things and some subtle things. I'm wondering what was going on with the weather in Seattle (Raining for two months. Is that Seattle in-joke? I feel like I missed something vital).  Anyway. I had an amusing and unique ride. And. There is a second book. Road Trip of the Living Dead! My italics for emphasis.