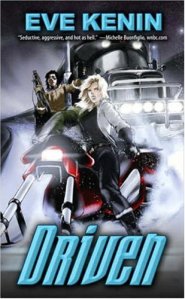 So Dorchester publishing has this new line of futuristic romances called Shomi fiction. All the covers of the books so far published are manga inspired, and the stories are a fusion of romance with sci fi, fantasy, thriller, action, and manga type genres. It's very unique sounding and I like cross-genre books so I've been keeping an eye on Shomi. So far Wired by Liz Maverick, Moongazer by Marianne Mancusi, and Driven by Eve Kenin are out. I'm probably going to pick them all up eventually.

Excerpts for: Wired ,  Moongazer , and Driven

My first buy was Driven because … seriously – it has siberian ice-truckers in it. I was gravitating to it because that sounded really interesting, plus I kept seeing good reviews for it, liked the excerpt, had $5 in Borders bucks burning in my pocket and a hankering for a HEA. Also a disregard for the length of the TBR (97).

The world in Driven is a post nuclear landscape with an extreme climate. Much of it is governed by a corrupt New Government Organization and by big business (headed by bad guy Duncan Bane). The two main characters are a couple of toughies who value supressing emotion and making quick decisions to stay alive in their harsh environment (a sub-zero Northern wasteland). Raina Bowen is in hiding from Duncan Bane, and determined to win the 50 million interdollars awarded in to the first trucker to deliver their cargo to Gladow Station. Wizard is the contact she was supposed to meet at Bob's Truck stop so that she can get a special license to ride the ICW, the Intercontinental Worldwide. Unfortunately, things go wrong at their first meeting, and the two are thrown together for longer than expected. There is a lot of action as they run from and fight the bad guys – who do remind me of the bad guys in the Mad Max movies.

The story is told from a third person POV, and mostly centers on Raina, although a couple of times the focus shifts to Wizard and his take on the situation. I thought the quick shifts to Wizard was a little odd in the story, and it felt very romance-like to get a tell-not-show, short internal monologue but it wasn't done often. Wizard has a robotic personality which I enjoyed. He reminds me of Data on Star Trek; he has a hard time with human interaction, misses subtle humor and sarcasm and confused about sayings because he tries to interprete them literally. Raina is similar in having a tight rein on her emotions, but not such an extreme case as Wizard (she has them) – she keeps people at a distance and has long hardened herself to expect betrayal. I enjoyed how she pointedly shoved Wizard away when he encrouched her space and hid her feelings even when she found herself attracted to him. It was an interesting relationship to see develop between the two loners.

I thought the author did a great job blending both light science fiction and romance. Lovers of only one of those camps may be turned off by the presence of another genre blended in here, or they may enjoy reading something different. I definitely liked the blend. There are sex scenes and while they did go on a little, they didn't feel gratuitious. The world-building was done well – information (on technology, politics, communication, whatever) was given as needed, not as a huge info dump, and the plot was action packed and well paced. Even till the end it kept my interest. There was a good balance between the story and the focus on the relationship. A recommend for those who like romance and who like cross-genre books. Maybe futuristic romance is going to be the next big thing after paranormals in romance? Hmm.