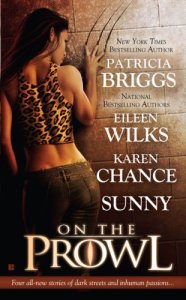 On the Prowl
Patricia Briggs

OK, been procrastinating about this review for some reason, better do it before I forget. I picked up On the Prowl because Patricia Briggs is on my buy list for her Mercy Thompson series and her short story in this book is from that world. I’ve also read Karen Chance (who I will keep reading) and Sunny (who I probably won’t), but I’d never read anything by Eileen Wilks before.

In this anthology, all four stories have to do with some kind of shapeshifting, so there are urban fantasy and paranormal elements.

Overall I liked the anthology, but it was a mixed bag. I was surprised in that I liked some stories more than I expected and others less than I expected.

Alpha and Omega by Patricia Briggs [link to excerpt]- Charles, son of the Marrok (the werewolf King) goes to Chicago to investigate suspicious activity there. At the airport he meets with Anna, the werewolf who called the Marrok, who is an Omega wolf. This was one of the surprises of the anthology. There was more of a paranormal romance rather than an urban fantasy feel to it, and I wasn’t expecting that because the Mercy Thompson series is very light on relationships. I’m not sure that completely worked for me because I thought the pacing was a little fast in the emotional aspect. It just didn’t fit into the constraints of a short story. I wouldn’t say I didn’t enjoy the story. The writing is well done. I’m going to keep following the series that is supposed to stem from the characters in it. Patricia Briggs says on her website that 3 books have been agreed on so far.

Inhuman by Eileen Wilks [link to excerpt] – This story centers around Kai, who is one of the Gifted in an Earth where some sort of unusual wave has caused a lot of people to discover minor pyschic abilities, but she is hiding something about her Gift even amongst her friends. She’s also covers for her neighbor Nathan who is an odd character, even though she’s not completely sure what he’s hiding either. This turned out to be what I thought was one of the stronger stories in the anthology and I enjoyed the subtle world building and the relaxed pace. I’d be interested in reading more books by this author. Hmm, I just realized that this short story is in the same world as her Lupi series. Well I couldn’t tell.

Buying Trouble by Karen Chance [link to excerpt]- This is another story which is in the same world as the author’s Cassandra Palmer series, and I didn’t think it was too hard to follow without reading the series but it’s hard for me to tell. It centers around Claire, a null who works for an auction house and who is avoiding her family and the Fey for some reason. When she sees a Fey noble at an auction, then sees her enemy cousin, she knows things are going to get bad. I was pleasantly surprised by this one, because OK I have ranted about the pacing in Chance’s books before. This story had some pauses in the action of the story which I was pleased by. Less rushing around = good!!! Also there was some mild humor in this one that I enjoyed.

Mona Lisa Betwining by Sunny [link to excerpt]- OK, yet again a story set in the same world as the author’s series, except this time this seems more of a side story in the actual series than a story separate from the series. A warning – major spoilers for book 2 in this short story!!! We have Mona Lisa, the main character of Sunny’s Monere series continuing down her path of sexual conquest and increasing powers. I think that the point of this was to introduce the character Lucinda who will be getting her own set of books, but this was done really awkwardly and I was wondering why Lucinda was even mentioned at all, because she sort of: enters, vaguely threatens Mona Lisa and then goes off somewhere, and that was it. Didn’t fit the context at all. I didn’t like this one and I skimmed it so I’ve already forgotten much of it. I really think this deserves to be in an erotic anthology, not with just paranormal/urban fantasy that’s not as sexual. OH. I remember one thing. At one point I actually paused for a few moments because I had just read the sentence “Crammingly so.”

5 thoughts on “On the Prowl by Patricia Briggs, Eileen Wilks, Karen Chance, and Sunny”