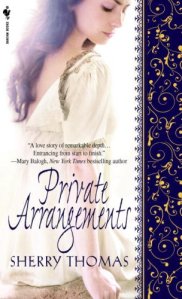 I won this book at Dear Author a couple of weeks(?) ago with the promise to post something about the book. I just got it on the 21st and so I've been reading like mad (well first I had to finish Exit Strategy) to post about it before the 25th when it comes out. That's today! I made it!

This book blew me away. I felt completely depressed reading half of it – Lord and Lady Tremaine have a "marriage of convenience", living in different continents, not saying a harsh word about one another, but for all purposes they are strangers – not seen together since the night of their wedding, ten years ago. In between the present story there are flashbacks that explain the past and what happened to make things the way they are now. Gigi betrayed Camden when they were both young and in love because she was desperate not to lose him, but conversely it was that very act that tore them apart. Camden is completely immovable in his decision to leave her and reside elsewhere, no matter how much she begged at first, even though this separation was probably as heartbreaking to him as it was to her (I could have just screamed). When Gigi finally gave up, they both took their own lovers and lead their own lives, far apart.

What brings this situation to a head after ten years of separation is the start of this story. At the beginning of Private Arrangements, London is agog over the gossip that Lady Tremaine has petitioned for divorce, because she want's to marry someone else! Even more shocking is the news that Lord Tremaine himself is in England, and knocking at her door.

Gah. I can't even explain how wretching this was. Their first meeting and talking is shown to the reader in flashbacks, in complete contrast to the present time of the story. They are both engaging and witty characters, clearly well-matched for one another and no one else. And I loved the writing – it had a light, lyrical touch, with a lot of wit. I really felt them falling for each other, I felt how desperate Gigi was, and how devastated they both were over what happened after their wedding. I saw the betrayals on both sides, and the stupid decisions which led to even stupider ones. And worst of all YEARS go by. TEN years, that kills me. I wish it was one year! I could have handled that better, the timeline and all the missed chances in that time just sent daggers into me. I was getting annoyed – the author is toying with my emotions, why is Camden being such a jerk?! Why can't he forgive her?  Is this author perhaps EVIL?

But then the more I read the more I understood. It was a different time then, the rules of honor were different, and that played a part in this. The book is set in the 1880's and 90's and it adheres to that well. Dispite his own past decisions, Camden comes back and no matter how calm they pretend to be, the chemistry is sizzling. Not only that, the tables get flipped and Camden begins to realize how desperate Gigi was not to lose him ten years ago. Now it's his turn to contemplate doing all he can to keep Gigi his wife, tied to him always. I was quite pleased when I realized that – Poetic Justice? Good.

But 10 years?! TEN!!! I suppose this is the one thing that kills me with this book since I keep going on about it.

My favorite part was the last 50 pages. A keeper, just to read and get to that part.

Meanwhile there is also another side story that I quite liked – with Gigi's mother, Mrs. Rowland, the pushy mother, hell-bent on her daughter marrying a duke, and then hell-bent on her daughter and son-in-law getting back together. When Gigi files for divorce, and she sees that Gigi may actually go through with it, she looks around for *other* dukes in the neighborhood, which leads to some amusing consequences that I really liked reading about. And she's hell-bent there too.

Here is a excerpt

Here are less ranty about 10 years reviews at Dear Author and The Good, The Bad and the Unread (1, 2)