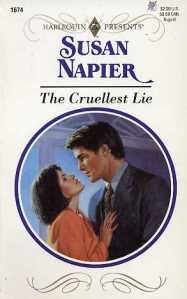 The Cruellest Lie by Susan Napier
I bought this for 75 cents at Salvation Army because I liked the other Susan Napier I read.

Premise: Claudia was the girlfriend of a famous race car driver (Chris Nash) who died on the track while she was pregnant with his baby. A few months later, Claudia is seven months along into a difficult pregnancy when Morgan Stone arrives at her door, assuming she’s sleeping with his son Mark and is having Mark’s baby. Morgan makes several withering assumptions about Claudia and won’t let her get in a word edgewise to clear up the mistakes. During his visit, Claudia falls and when she’s taken to the hospital she discovers she’s lost the baby. It’s not Morgan’s fault, but in her grief Claudia allows him to believe he was responsible.

Fast forward two years – Claudia hasn’t seen either Mark and Morgan since she lost her baby, when she runs into them both at the hotel she’s working as a PR rep for. The father and son have a better relationship, but there’s a bit of a weird competitive edge to Morgan about Mark where Claudia is concerned. Morgan decides to offer the hotel (and Claudia) a chance to work with him on race-oriented functions surrounding a five-hundred kilometre sports car race in Wellington and sparks fly.

My Thoughts: When they first met, Claudia seemed to have a backbone, mocking and getting angry at Morgan for what he says, but the second meeting – while she tries at first, it seemed like he’d always win the conversation, never really listening to her or twisting things around his way. It was really annoying to read! It did not make me like either of them very much – him for being a jerk, her for being a doormat (she’s also described as fragile and actually swoons at one point).  Morgan was definitely the more annoying of the two characters however. Here are some examples:

‘Or I could just throw you on that bed and strip you,’ he threatened silkily. ‘You never say no to anything I want there. Hell- a few minutes of foreplay and you’re usually the one begging…’

RIGHT? Isn’t this inappropriate? He’s saying this crap in front of his son? Aieiee!!

Also there really is a scene here with a bodice, but no ripping of said bodice. OK I’m done.

Overall: I liked the other Susan Napier book I read, The Price of Passion (reviewed here) MUCH better than this one. Here I found both the hero and the heroine hard to identify with, and the hero was particularly offputting. I believe this is because this book was written a long time ago (1993), and the author’s writing has improved quite a bit since then.  I’m still going to look out for this author and try another one if I find it.

2 thoughts on “The Cruellest Lie by Susan Napier”