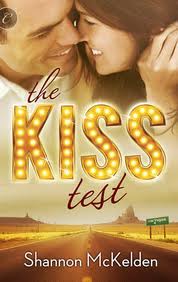 The Premise: Margo Gentry is happy with her life as a award-winning DJ of Manhattan’s only Country Music station, and her relationship with Kevin, a man who doesn’t want to take things to the next level. Then everything falls apart – Margo is laid off when her station changes format to Korean radio, and Kevin wants to get married. When she balks at marriage, Kevin reveals that he doesn’t think much of her job or collection of weird Elvis memorabilia. With no where else to go, Margo moves in with her best friend Chris Treem, a known womanizer. To top it all off, Margo’s mother is getting married for the 11th time, and wants Margo to be her maid of honor — the last thing Margo wants to do, but without a job, she has no excuse to skip it, particularly when Chris wants to drive cross-country to be there.

Read an excerpt of The Kiss Test here

My Thoughts: I read this book in one sitting on the plane trip from NY to AZ (visiting the family for the holidays). I’ve always liked romances in which long time friends realize they feel more for each other than friendship, and with the promise in the blurb for a long road trip between Margo and Chris, kept me glued to the pages in anticipation of their relationship heating up.

Margo seems like the last person I’d expect to fall in love. She’s the narrator, and she makes it very clear that she’s happy to never get married and to make the same mistakes her mother did. In fact, she has been known to break up with a guy just for falling in love with her. Then we have Chris. An extreme sports enthusiast and store owner, he’s good looking, dangerous, and a magnet to females. He often administers his “Kiss Test”, not minding if Margo is nearby, and has been Margo’s best friend since she was eleven. It didn’t seem like these two were anything but really good buddies, and neither is saving themselves for the other by any means (on the contrary), but as the book continued, I began to see that Chris may be the perfect guy for Margo and that she may have been in love with Chris, and vice versa, all along. With his willingness to let her indulge in a trip as an homage to Elvis, despite not being a fan, and forgiving and taking care of Margo when she repeatedly gets herself in (very funny) trouble throughout the trip, Chris showed his acceptance of Margo as she was. In the meantime, the trip teaches Margo that honesty may be the best policy, and when she’s finally honest with herself, she makes some rather scary discoveries.

I liked that the story delves into Margo and Chris’s past to explain who they are today, although the explanation comes a little after the fact. I found myself judging Margo based on her actions, then learning the details behind those actions afterward.  For the most part, the past history does explain a lot of things, even if I wish some of these revelations were explained earlier. The ending however, had one minor story element that felt a little tacked on, but maybe that’s just me.

There’s lots of sexual tension but only one sex scene in this story, so this fell into what I look for in romance – slow burn and not all about the lust.

Overall: This felt like a modern-day contemporary romance — where the hero and heroine are both flawed and no one is an angel. Even if I disagreed with how these two conducted their relationships (which could be a problem for other readers), I wanted an HEA for both of them. The relaxed chemistry between best friends that becomes surprisingly more is rather refreshing and sometimes funny, and if this book came out in print form, I’d buy it to have a hard copy.

2 thoughts on “The Kiss Test by Shannon McKelden”