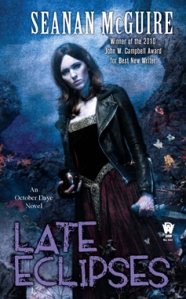 Ahh, October Daye. This is one of my favorite series, and each time I read a book, I want to read the next one right away.

Late Eclipses is the fourth book of the series:
Book 1: Rosemary and Rue –

**** There may be mild spoilers for earlier books in this review ****

The Premise: Toby has had barely any time to settle down after the events of the last book when she is ordered to appear before the Queen of the Mists, and since Toby has annoyed the queen before, this request sounds like trouble.  Soon after that she receives news that Lily, her friend and The Lady of the Tea Gardens is sick. When more people are stricken, it becomes apparent that Toby and all that she holds dear are a target. When Toby detects the scent of an old enemy, Oleander de Merelands, in the wind, she thinks she knows what’s going on.  Unfortunately, things are never simple for Toby, and this time she may have very few options to save both her friends and herself.

My Thoughts: When I think about the October Daye series, I think about structures that are built piece by piece and brick by brick.  The first book, Rosemary and Rue was the cornerstone, and every subsequent book has built upon that. It’s not just the worldbuilding (where there are pockets of worlds through secret doorways and fae creatures live parallel to the ordinary world – love it), but the way Toby’s back story has informed and continues to inform the current plot. This is why I don’t recommend reading this series out of order (it can be done, but it wouldn’t be as much fun); without the first books, the places Toby has been and people she has met wouldn’t be as significant in the current story.

I love how there are always hints throughout the books about Toby and her situation. It’s like some kind of delicious game between the reader and the writer. I try to guess what’s coming, I spend time mulling over what happens in the books and what some remarks may mean, and I wait for the next book. Then I’m either rewarded by being somewhere in the ballpark or I’m completely and utterly wrong. In Late Eclipses I was happy to have some of my suspicions answered, but not the way I expected. Of course I can’t speak of it here, but let’s just say that it is good stuff. In fact, this book manages to be the best in the series so far because of all the revelations within. It’s not unusual in urban fantasy to find a main character that investigates otherworldly crimes, but the guessing games set this series apart.

In Late Eclipses the newest disaster is a mysterious sickness which strikes Toby’s friends (friends who cannot get sick), right when Queen of the Mists begins her machinations involving Toby. As usual there’s a lot of action and Toby spends much of the book breathlessly running from one place to the next in an attempt to stop bad things from happening. In the past Toby gets knocked around quite a bit. This book is no different, even with Toby making smarter decisions and with friends backing her up.  I was at the edge of my seat, mentally yelling at Toby to watch out because it seemed like someone was out for her in particular. There was more of an anticipatory feeling throughout this book than in the past because it wasn’t as simple as finding a murderer. This felt like a conspiracy.

I was expecting characters that until now have been off the page to finally show up (not a spoiler, since this is on the back blurb), but Toby has many more allies now than she did when the series started. They rally around her, even when it could result in adverse consequences for them. I really like that Toby’s circle of friends has grown over the course of the past three books, and it’s very touching to see the rewards of her being her usual Hero self.
The side characters in this series are great, and we get to learn a little bit more about them in Late Eclipses, especially Toby’s Fetch, May, and her liege, Sebastian. There’s also some new information about people who don’t love Toby, including Raysel. The only problem I had with the characters was that I noticed there were a lot of them who hate Toby for failing as a Hero. It was odd for this motivation to pop up repeatedly, but before I got too perturbed by this, the characters differentiated themselves from each other, making the observation moot. Your mileage may vary on this pattern.

Of course one of my favorite secondary characters is Tybalt, King of the Cats. I’m always hoping that there will be romance between him and Toby. The romance in this series is never in the foreground, but there are some interesting developments here. I think fans of both Tybalt and Connor will be happy with how things go in this book. It does complicate things for the next one though. I was already looking up the release date for the next one, One Salt Sea while I was midway through Late Eclipses (September 2011).

Overall: If you are an urban fantasy fan, you should read this, but don’t stop at the first book, because the overarching storyline builds up as the books go along. It is rewarding to keep reading the series – if I think over what was revealed in this book, I become positively gleeful. I need to run out and find someone who has read it so we can discuss. To me, this series just gets better and better, and this is the best installment yet.