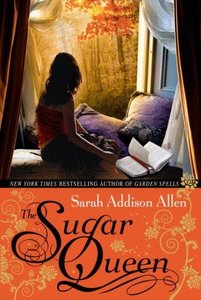 [Yup, quiet yet again, and I fear end of June is the light at the end of the tunnel, but I’m trying to break the sad hiatus over here ]

I remember seeing positive reviews of Sarah Addison Allen’s books, but what kept me away was knowing that they had a bit of magical realism in them. This is my confession – high school has ruined magical realism for me. It made me hate magical realism. I have avoided it for a very long time since, but because the cruise library had a very small section, The Sugar Queen was the only book I was remotely interested in, so I picked it up on a whim. It was fortunate that limited choices led me to this one, because I ended up really liking it despite my prejudice.

The Premise: Josey Cirrini is trying to resign herself to a life of obedience to her mother Margaret. They are one of the richest families in Bald Slope, North Carolina, thanks to the late Marco Cirrini, who made his fortune in turning a nowhere town into a popular ski destination. Josey spends her days trying to make her mother happy, while secretly hoarding a cache of candy, romance novels and travel magazines in her closet. Then one night, Josey discovers local waitress Della Lee Baker hiding in her closet too, and Della refuses to leave without fixing up Josey’s life. Soon Josey finds herself befriending cafe owner Chloe Finley, who has problems of her own – she just kicked out her boyfriend Jake Yardley after discovering that he cheated on her. Slowly but surely Josey and Chloe’s lives intersect and change, causing a ripple effect on those around them.

Read an excerpt of Chapter 1 of The Sugar Queen here

My Thoughts: It’s hard to come up with a premise for this book that doesn’t sound like it has some very plot points that go off in seemingly non-related tangents. This story begins without any preamble and drops us into an odd situation – Josey finding Della Lee hiding in her closet. If you were to make any assumptions of where this is going you’d likely be wrong, but the unpredictability of the narrative is part of the charm of this novel, along with it’s infusion of odd magics.

Let’s start with Josey, because the story begins with her. Her life is regimented by her mother’s schedule and not much else. She’s constantly told what colors to wear (not red!), what to do and how much trouble she was as a child. It’s a dreary existence, despite it’s well-to-do trappings, and she could be a meek, pitiful daughter because of it, but Josey has resilience. She has her pocket of escapes and happiness – her candy and reads, her love of winter, and her secret crush on mailman Adam. Then Della Lee’s interference pushes Josey out of her rut. She tells Josey to wear a bit of makeup and that she does look good in red, that she should leave Bald Slope and see the places she dreams about, and she nags Josey to go to the courthouse to buy a grilled cheese sandwich. This leads Josey to cafe owner and excellent sandwich-maker, Chloe. It’s a hard time for Chloe too, because she just kicked out her boyfriend, but she’s still happy to befriend Josey. In fact, their friendship seems to come as easily as breathing, and it’s just the thing for both of them.

The narrative flows easily, albeit in a route that’s difficult to foretell. We spend some time with Chloe, discovering the back story of her current problems, and even spend some time with Margaret, Josey’s mother and discover what she’s hidden behind the aging beauty’s strict adherence to propriety. The women are the central characters here, but we also spend a few moments peeking into the minds of their respective paramours, Jake and Adam, both whom are caught by surprise from the women they took for granted.

“Why hadn’t he seen it before? Three years. Why hadn’ he known she was in love with him? “Are you sure you don’t want to keep this scarf?” he called after her.
“No.”
“No, you don’t want to keep it? Or no, you’re not sure?”
She looked over her shoulder at him and smiled slightly. His breath caught.
He felt a strange stirring, something he hadn’t felt in a very long time. It felt a little like when a limb falls asleep but then slowly surely, there’s a tingling, an almost uncomfortable sensation… of waking up.
“

Throughout it all, wondrous things happen. Della Lee is part of this magic, like the way books suddenly appear when Chloe needs them, the way water boils when Jake and Chloe get close, the way Josey came feel that Adam is nearing her house. It’s a rather quirky and charming species of magical realism; not the kind I’m used to, which is a good thing, and this charm permeates the rest of the book.

Overall: I liked it, and maybe I’m a bit surprised I did but it charmed away my misgivings about reading a book with magic realism in it. I find it hard to describe – simple, yet clever, slice-of-life, yet magical, twisty, yet genuine. I found it landed on the feel-good side, so I think I’ll be returning to Sarah Addison Allen when I’m looking for a nice read that will leave me with a small smile on my face.

25 thoughts on “The Sugar Queen by Sarah Addison Allen”