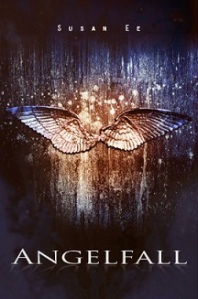 Angelfall
Susan Ee
I first became aware of Angelfall by Susan Ee on Goodreads when I saw need-tea reading it and saw all the comments from her friends about her “finally” starting it. So I checked it out, and saw a lot of positive reviews. Now, I normally wouldn’t have read this because it’s a YA story that has angels in it, and I’m pretty ‘meh’ over angels and YA. But… 99 cents, good reviews, and need-tea’s review where she said about the lead, “You didn’t see her turning into some pathetic doormat over the male with her only goal in life being waxing poetic in lengthy passages about the male lead’s perfection and hotness. Oh, no no no.”  OK, phew.  With that assurance, I bought it.

The Premise: Six weeks ago, avenging angels appeared out of no where and wrecked havoc on humankind. Most infrastructure has been destroyed and the worst kind of people roam the streets preying on the weak. Penryn Young, her wheelchair bound sister Paige, and her mentally ill mother have been holed up in their apartment in San Jose. One night, they head for what they hope is the relative safety of the hills, but their timing couldn’t be worse.  They stumble upon a group of angels. Penryn’s mother runs away, and her sister is carried off.  Peryn’s only hope of finding her sister is Raffe, the angel whose wings the other angels cut off and left on the street for dead.

My Thoughts:  This is a story narrated by our heroine, Penryn, a relatively hardened teen who is used to taking care of her mother and sister. Now that the world has gone crazy, she has the skills to deal with it. She reminded me of a self-sufficient urban fantasy heroine, gritting her teeth and dealing with the latest disaster. When Paige is captured by the angels, and her mom runs off, Penryn just reacts with her usual determination. Raffe is the only card she has, and she’s going to use him, even if it means keeping one of the enemy alive.

I liked Penryn, and I liked that her first reaction to Raffe was appropriate for the situation. He may be gorgeous and otherworldly like all the other angels, but that doesn’t matter, she treats him like he’s dangerous, which he is. He’s not a guy she’s interested in dating, he’s the guy who’s going to help her get her sister back, and she’s not above making an injured angel suffer to get answers. We don’t get to see much of Raffe’s point of view, because this is in first person, but we get an idea of his take on things, and his view is pretty pragmatic. Getting to the angel stronghold where someone may be able to surgically repair his wings, among other things, is in his best interests. He has his own problems and Penryn is just a means to an end.

As the story continues, Raffe and Penryn are forced to rely on one another while navigating through empty streets, ruined buildings, and post-apocalyptical chaos. I liked the organic way their respective walls began to crumble, and I tend to be more hard on the paranormal otherworldly guy and young teenage girl relationships, but that said, the relationship was not at the forefront because both characters have more pressing things to deal with. What was at the forefront is getting Paige back, and later, all the complications that come from being in the middle of the war between humans and angels.

There were a lot of things in this story that are very thoughtful. It felt like the author tried to address some of the kinds of questions a reader may have while reading the book. For instance, Raffe is very strong, but as light as a bird, which explains how his wings can sustain his weight. The story also hints at angel politics and makes the angels very human in their beliefs, which took away any religious implications I might have had, and I got the impression I would learn more about these things in subsequent books. Peryn and her family dynamics are also explained well. On the other hand, I still felt like there were places where the explanations were a little too convenient, and I did catch a couple of minor details that didn’t mesh (Penryn’s mother was a character that really poked at my sense of disbelief, but I have a feeling there’s more to her insanity that it appears). These things didn’t keep me from enjoying the story and wanting to read the next one though. My hope is that the world building continues to be expanded, and the back story behind the angels can be further developed. I’m also curious to see what happens to Penryn and Raffe’s relationship after the ending of Angelfall.

Overall: This is the sort of apocalyptian/post-apocalyptian YA that checks off some of my requirements for a good story: an independent heroine, a clear objective, a romance that develops at a realistic pace, and an exciting plot. There are flaws, mostly to do with some things being a little convenient in the story, but these are relatively minor, and I was willing to overlook them. All in all, I was pleasantly surprised by this one, as it’s the first YA with angels in it that I’ve liked.

P.S. Fans of Ann Aguirre’s Enclave may like this one. The fast pace, ruined world, and two people surviving in it are similarities between the two books.

18 thoughts on “Angelfall by Susan Ee”