This review is based on an ARC provided by the publisher, Emily Bestler Books/Atria.

White Horse
Alex Adams
The Premise: Zoe is a woman traveling across Europe.  War and disease have decimated the world, and Zoe has to contend with the few survivors – the immune and those who mutated into something else.  There are dangerous people on the road, but there are also those who haven’t lost their humanity, including Zoe — which is why she rescues a young blind girl and brings her along. As they travel, Zoe remembers the past eighteen months that brought the world to where it is now. For her, all began when she worked as a janitor at Pope pharmaceuticals and came home one day to find that someone had bypassed her home security and left a mysterious jar in her living room.

My Thoughts:  The narrative in White Horse alternates between THEN, when Zoe first finds the malevolent jar in her apartment and the world slowly begins to slide into chaos, and NOW, when Zoe is traversing Europe on foot amongst the rubble and death. Both timelines promise to answer lingering questions as Zoe narrates – what is Zoe’s destination and why, in the NOW, and what was in the jar and what is this new illness in the THEN. These questions do get their answers, but in the meantime, Zoe is the pragmatic hero holding on to her sense of decency during a terrible time.


“When I wake, the world is still gone. Only fragments remain. Pieces of places and people who were once whole. On the other side of the window, the landscape is a violent green, the kind you used to see on a flat-screen television in a watering hole disguised as a restaurant. Too green. Dense gray clouds banished the sun weeks ago, forcing her to watch us die through a warped, wet lens.There are stories told among pockets of survivors that rains have come to the Sahara, that green now sprinkles the endless brown, that the British Isles are drowning. Nature is rebuilding with her own set of plans. Man has no say.

It’s a month until my thirty-first birthday. I am eighteen months older than I was when the disease struck. Twelve months older than when war first pummeled the globe. Somewhere in between then and now, geology went crazy and drove the weather to schizophrenia. No surprise when you look at why we were fighting. Nineteen months have passed since I first saw the jar.”

THEN, Zoe mops floors at her job at the drug company and has normal family – her two parents, and her married sister, Jenny. Zoe’s biggest problem was boredom and dealing with her relatives’ annoying matchmaking. Then the jar shows up, and Zoe begins to see therapist Nick Rose and has her friend James (a assistant museum curator) examine it. Acquaintances start to get sick, and seemingly incongruous events begin to take on alarming significance. NOW, Zoe is in Europe, trekking through gutted villages. She is determined to get to a specific destination, and her day-to-day worry is about survival. In both worlds, there are secondary characters that come and go, some making more of an impact than others, but everyone is dealing with the same things Zoe is. Relationships are sketched out quickly – there is the sense that they may be ephemeral once disease strikes, but it’s always clear how Zoe feels about the other characters, and it’s easy to empathize with her feelings.

THEN is filled with a sense of foreboding, that something terrible is beginning to happen. NOW is dreary and bleak – the horrors so many that Zoe has become somewhat numb. Both sides of the narrative are peppered with unsettling details. Like a lot of Horror stories, White Horse makes it impossible to feel completely comfortable with the story. Fire alarms along a white hallway are linked to menstrual blood on a sanitary pad, and crumbs flying from a mouth are described in icky detail. As for the gory stuff, we get glimpses of the monsters that were once men along Zoe’s journey, but the story doesn’t focus on them. The things people do to each other and to themselves is just as gruesome – there is a rape and assault within the first fifteen pages, plenty of death (some of it very brutal), and a creepy judgmental character stalks our protagonist through Europe.

While there is this pervasive thread of Horror throughout White Horse, Zoe herself manages to keep her moral compass, and she finds other people who do the same. There is a lot of hope in this story, if you can grit your teeth through the rest of it. There is even a love story in there.  Although it’s not delved into as much as I would like, the romance lifts the dark mood of the story somewhat.

Overall: White Horse is a post-apocalyptic survival tale focusing on a woman named Zoe before and after the world-wide cataclysmic event. Zoe’s tell-it-like-it-is voice and my curiosity about what happened and what will happen kept me flipping the pages. Although I wouldn’t normally pick a Horror-infused story for myself, there was just enough hope alleviating the darkness to appeal to me. That said, I give you fair warning — this is a very dark and often gruesome tale. It’s difficult for me to predict how much the unsettling bits will affect you.

Other reviews:
Let me know if I missed yours

I like the cover of the UK edition of the book: 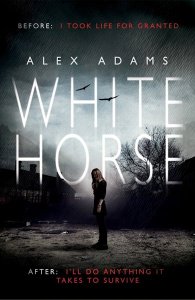