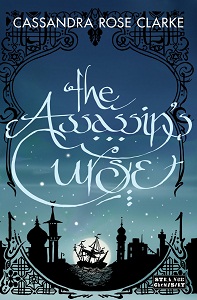 This was a book that popped on my radar because of a On the Smuggler’s Radar post over at the Book Smugglers. Pirates and assassins and curses (oh my)! Throw in the suggestion of a romance in there and you have me obsessively searching for info online. Finally I checked Netgalley and it was there! I hit that button to request it in a flash. Meaning to read the book after the books I was supposed to read, I downloaded it and.. looked at the first few pages. Yeah, so three hours later at 2am I was done. I couldn’t help it. This was a fun fun book and it was so easy to zoom straight through it.

The Premise: Ananna belongs to a respected family within the Pirates’ Confederation, the Tanarau clan, and she’s spent all her seventeen years living on a boat.  She’s proud of being a rough-and-tumble pirate, but when her family arranges an alliance with the low-ranked but rich Hariri clan by marrying Ananna off to their son, Ananna balks. During the introductions to her husband-to-be, Ananna plays along, but at the first chance she gets, she’s is on a camel and leaving her fiance in the dust. Unfortunately, the Hariri clan employs assassins when they are displeased. Skilled at both combat and blood magic, assassins are almost legend — not real. Or so Ananna thought, until an assassin appears. Desperate and terrified, Ananna makes a split-second decision which shockingly activates a curse and chains her to the very man hired to kill her.

My Thoughts: This book starts off abruptly. It begins right in the middle of Ananna’s meeting with her new fiance. She makes a quick assessment of his prospects as a pirate captain (not stellar), and escapes. At first I had some catching up to do to understand Ananna’s situation, but once she moves from prospective bride to escaped fugitive, I got the gist: Ananna is a pirate princess and being married off is not on her agenda. Fleeing on camel, Ananna takes to the streets like a female Artful Dodger, using the skills learned over a lifetime as a pirate to survive. The story is very dynamic — Ananna is constantly on the move. At first she just wants to get away from her arranged marriage, but when she finds out that an honest-to-goodness assassin is after her, her desperation ramps up.  Assassins, it is said, are not just killers. They are blood magicians. It seems likely that Ananna will die–until a turn of luck puts Ananna in an partnership with the very assassin sent to kill her.

Ananna is a handful, with a lot of rough edges that come through in her narrative (“The sea crashed against the big marble wall, spray misting soft and salty across my face. I licked it away and Mama jabbed me in the side with the butt of her sword.“) Although she is seventeen, not more than five years younger than Naji, the assassin, her unrefined manners and pirate’s vernacular (peppered with ain’t‘s, double negatives and bravado) made her seem younger. It’s suggested that Naji sees her that way too – he is horrified by the whole situation. Assassins are by their very nature solitary. They do not spend their time looking after teenage girls.

There’s a gentle humor in an uncouth pirate girl taking on a magic-wielding ninja-assassin, then the two being shackled to one another. Even in the most dire circumstance, Ananna’s luck always leads to a path of ever-increasing disaster, and the story seems to acknowledge this with sly nudges. It’s not enough that Ananna has the wrath of a pirate clan behind her and she’s stuck in the middle of the desert, no, an assassin joins the chase. When Naji switches sides, things do not get better, instead they seem to get worse. The Hariri clan still wants Ananna dead and Naji has enemies of his own, enemies scarier than the Hariri– who now have Ananna on their radar. As Naji and Ananna continue their adventure, the hits keep on coming.

The setting of The Assassin’s Curse is something out of the usual Desert and High Seas Adventure canons. The magic of this world has familiar elements too – blood, herbs, an invocation, and an affinity, all combine to create a spell, but there is something new and fresh in Ananna’s experience of it. Her voice with it’s street edge, mixed with the meshing of familiar concepts in new ways (pirate and assassin, desert trek and sea adventure, a dash of weird thrown in for good measure) really makes the story. That, and the bickering between reluctant allies Ananna and Naji. I really enjoyed the way their relationship slowly developed through the book and the hope that it could develop into something more.

Ananna’s pirate persona and voice may not appeal to some, but while I did find Ananna  young and hotheaded (with an odd resentment towards attractive people), this just made her realistically flawed to me. Likewise, Naji’s hang-ups with appearances showed his own human weakness. I hope this doesn’t turn into a story that advocates a bias against beauty, but I don’t think it will. I expect to like the next installment just as much as this one, and I plan to read it when it comes out. This was a lot of fun and I’m excited to see more.

Overall: The Assassin’s Curse an entertaining Fantasy YA story: it has swashbuckling adventure, a pirate heroine, and a blood magic-wielding assassin, for crying out loud. If that is something that appeals to you, I say try this one and read it for the brain-candy enjoyment of it. I read it in four hours. I had a good time. I will come back again for a continuation to this ride.

Other reviews:
Not yet

11 thoughts on “The Assassin’s Curse by Cassandra Rose Clarke”