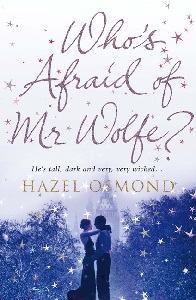 Who’s Afraid of Mr Wolfe?
Hazel Osmond
I’ve been dying to read Who’s Afraid of Mr. Wolfe ever since Sabrina reviewed it at About Happy Books and gave it a very positive review.  I’ve been dipping my toes into British Chick Lit more lately after Sarra Manning’s Unsticky just bowled me over this year, and Sabrina is my go-to girl on all that is Chick Lit-y (without being too Chick Lit-y). The only thing holding me back from hitting that buy button was the Ol’ TBR pile, but I eventually gave in (as I inevitably do).

The Premise: Ellie Somerset is a copywriter in a London advertising agency where the big bad Mr. Wolfe has just arrived to shake up and streamline the company. There isn’t a woman at the agency immune to Jack Wolfe’s broody Healthcliff aura, but Ellie is convinced that under it all, Mr. Wolfe doesn’t deserve all the fuss. She’s determined to stay above the fray but can’t seem to help using her sharp tongue to make little jabs at the boss. As for Jack, he doesn’t know why he’s noticing Ellie, who has a problem with authority and dresses like she’s still in college (nothing like the usual elegant women he dates). As time goes on these two people, each with their own relationship baggage find themselves drawn to one another despite their best efforts. Jack is in panic mode because Ellie brings up feelings he doesn’t want to deal with, but he can’t seem to stay away.

Read an excerpt of Who’s Afraid of Mr. Wolfe? here

My Thoughts: Ellie is half of a two woman creative team. She brings the words and her partner, Leslie brings the art, and together they produce fresh new ideas. Unfortunately, if they think out of the box too much, they’re usually shut down by higher ups afraid of pushing the envelope. At home, Ellie’s life has similarly stagnated with her long time boyfriend, Sam, who is often too busy entertaining clients to spend time with her. The only unexpected element in Ellie’s life is her great aunt Edith, who lives life loud and to the fullest, and has eccentric habits like playing scrabble with dirty words. While Ellie has a great relationship with her aunt and with Leslie (who has become her best friend), all in all, Ellie is in a very “comfortable” but unexciting place in her love-life and work.

Then Jack Wolfe arrives and shakes up her life.

Jack is basically what you’d expect from his name – the wolf of the office. Everyone is abuzz when he arrives and in short order begins to cut out all the laziness and uninspired thinking that kept the agency back. His tall frame, dark broody looks and Yorkshire accent paired with his confidence has colleagues swooning and calling him Heathcliff. Ellie is the only hold out. She’s convinced the culling will soon stop the silliness over “a guy who looks like a six-foot-three, permanently scowling, sharp-nosed wolf.”  When they interact, it’s a battle of wills as Ellie feels compelled to take Jack down a peg, and Jack enjoys deliberately unsettling her. Jack recognizes Ellie and Leslie’s ideas as good ones and challenges Ellie to do more for her career, but Ellie only ends up feeling defensive and picked on. Their attraction (which both try to deny) only muddies the waters further.

Even though this plot is one that is fairly typical (contentious coworkers who really are attracted to one another, the gay best friend, an obstacle to their happiness), it was still so delicious to read and see how Ellie and Jack would succumb to the inevitable. While I wasn’t surprised by how the story unfurled (for example, I fully expected Ellie’s boyfriend to go and was not surprised when he did – I doubt this is a spoiler to anyone), it managed to feel unpredictable and nuanced. Osmond added just the right touch of emotion and seriousness to the story to keep it from being just another frothy read, and I liked that while this was mostly a heady, romantic story, there’s pain and loss in here. I frowned over Jack’s track record, or how he acted when things got more serious than he could handle, but the story peels back his granite facade to reveal what is really going on there. So Ellie and Jack both have their emotional moments that trigger erratic behavior, but I understood why, and got to see what happened as a result.

I loved the glimpses into what made the characters tick, and boy, I could really feel their emotions and got caught up in their every drama. I loved Ellie’s quick and sharp sense of humor and her kindness and love for her aunt. And Jack’s presence just stole the show any time he was on the page. I think if I understood exactly what a Yorkshire accent was, I would be even more under his spell (I used youtube to figure it out, but I don’t think it’s the same). For North & South fans, if you need an excuse to read this one, the author gives Richard Armitage a nod: “because without his cravat and scowls there would be no Jack Wolfe”. Just sayin’.

I also quite liked the colorful secondary characters of Who’s Afraid of Mr. Wolfe, particularly great-aunt Edith and her naughty Scrabble. I got a chuckle at imagining this diminutive lady doing what she wanted and looking how she wanted. I think she got a kick out of surprising her niece, just a little. Leslie, the once intimidating, edgy artist that’s now Ellie’s best friend and creative partner was another character I enjoyed. Leslie and Ellie’s easy banter, their perfectly in sync partnership, and the sweet way Leslie acts around the girl that is her One made their friendship a lovely one to read.

Overall: Despite the 490 pages, I think I read this one in about a night and a day.  I was looking for a feel good romance and this delivered just that. The plot is familiar – two contentious coworkers falling for each other despite themselves, but Who’s Afraid of Mr. Wolfe expands it so it feels like the book equivalent of the extended version with deleted scenes. So if you like the Alpha male of the office falling for the plucky young up-and-comer storyline, this book delivers a generous serving peppered with humor and emotion.

Other reviews:
About Happy Books – “one of my favourite contemporary romances of the last months and maybe even of my whole life” (this review kicked off the Want for this book)
Chachic’s Book Nook – positive (her opinion matches mine with this one. Spot on)

Other links:
Interview with Hazel Osmond @ Chachic’s Book Nook
JA·NIC·U /'dʒænɪsjuː/ - is a book nerd who lives in New York. She enjoys a good escapist read, including but not limited to: fairytale retellings, modern-day adaptions, space operas, and happily ever afters. READ MORE >>>