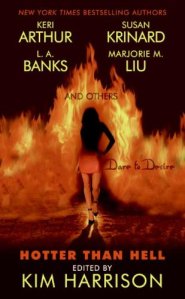 I really need to catch up on my reviews – I actually read this book last month but didn't have the time to review it with all the "real life" stuff going on.

The one thing that gets me with this book is how different it seems from the rest of the "In Hell" anthologies that came before it. It really strikes me that Hotter than Hell is more paranormal romance than it is urban fantasy, because the premise in all the stories is sex with a paranormal twist. Pretty much all of these stories have a relationship with sex included, which makes it more romance than not, which isn't the case as much in the other books (which makes them more "urban fantasy"). What do people think – do I make sense? Agree/disagree with this?

Other "In Hell" books I've reviewed:

I am really critical of a book when I just do not believe the relationship – if it seems too contrived or the reason for the two loving each other seems unbelievable and the author just explains it with "love at first sight" and I can't see what one character sees in another, I can't buy into it. If you tell me how attractive either character is, it still does nothing for me. So? You know how many good looking people there are in the world? Attributing good characters to a person just because they are good looking, that's not common sense (I should hope). So tell me, why is this one so special to that one? Do they at least share something more substantial than a cheesy sexual attraction? Otherwise, it makes the story really boring. That is why I feel somewhat disappointed in a lot of the stories in this anthology. In most of them I found too much of the sexual attraction, not enough to make me believe in the relationship. I think that to some extent choosing to make the stories require sex and then making them short was shooting everyone in the foot – there simply is very little space to have a story, have crazy sex, and also make me see a believable relationship developing, a relationship where I can buy into a HEA. Not enough room for it all, and something lost out.

All the stories that managed to keep the three things balanced (plot, sex, believable relationship) – those where the stronger stories in the anthology. Those that relied on cliches which resulted in me not really believing the relationship, were the weaker stories. I'm sorry to say that for me, there were more weaker stories than strong ones. I think that most of the ones that had sex but didn't try to make the story have a fully formed romantic relationship occur within the short story were stronger – Tanya Huff's "Music Hath Charms", Lilith Saintcrow's "Brother's Keeper" (which still has a flaw – it threw the reader in without much information about the world. I recognized characters in her Dante Valentine series though), and "Dirty Magic" by Kim Harrison (also shares a world with her Hollows series, but this one didn't feel confusing). The best romantic one I think was "Moonlight Becomes You" by Linda Winstead Jones because the heroine was funny in a cute way, though I didn't see much from the hero's personality. "Minotaur In Stone" by Marjorie M. Liu was also good because of the lyrical writing, but there is something a bit off with the relationship there, I guess I found it hard to believe the heroine would go so far for someone she just met, but then she's isolated and so is he. That could be their bond, but I felt it could have been more cemented than it was.

deety at urbanfantasy.wordpress.com reviewed this book with a breakdown of the stories, and I found myself agreeing with most of what she had to say.