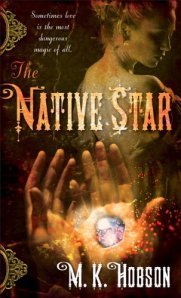 I bought this book based purely off this review by calico_reaction over at Dreams and Speculation. Wild West setting with an alternative history involving Warlocks and Witches? I shall have to try some of that.

The Premise: It’s 1876, and Emily Edwards, the Witch of a small town called Lost Pine, is getting desperate for money in the face of competition from the fancy mail-order company, Baugh’s Patent Magicks. So she does a bad thing. She creates a love charm and uses it on Dag Hansen, the timber man who has brought jobs and prosperity to Lost Pine. When she does, she’s almost immediately called out for it by the town clairvoyant, Besim. Besim also reveals that the zombies working in the town mine are going to break free. Besim is ignored by everyone, since he’s made bad pronouncements before, but Emily knows he’s not lying about her use of bad magic, so she goes to check out the mine, along with irritating town newcomer, Warlock Dreadnought Stanton. One thing leads to another and suddenly Emily has a mysterious blue stone lodged in the palm of her right hand, she’s fleeing Lost Pine with Dreadnought Stanton, and evil Warlocks who want the stone are trying to kill them both.

My Thoughts: This reads very much like a Wild West cross-country adventure which just happens to be set in an alternative world where magic is an accepted part of life. I imagine Emily Edwards and Dreadnought Stanton are dressed up much like Jodie Foster and Mel Gibson in Maverick, (minus the confidence artist personalities), as they take horse, train, and a hybrid mechanical-magical flying machine from one destination to another, chased by various men bent on getting the blue stone embedded in Emily’s hand. The author has mentioned in guest posts a pulp novel influence, particularly Horatio Alger, and she eludes to the influence in The Native Star with characters who read pulp fiction from Mystic Truth Publishers, and magazines like Ladies’ Repository.

The world building goes along with the pulp fiction influence. There’s Wild West adventure staples mixed with Victorian era sensibilities. Emily has to deal with being a woman in a world where women were often expected to stay at home and act proper, but she’s grown up with a lenient father in a town where she is respected for her witchcraft. When she ventures outside of Lost Pine, the disparity between her rural upbringing and the straightlaced expectations of how she should act is a big one. There’s even a sort of woman’s suffrage movement in the form of a group called the Witches Friendly Society.

Along with this mixed attitude about women, is a mixed attitude about magic. It’s something everyone knows exists, but whether magic is a natural part of life and can be explained scientifically or as the work of the devil depends on who you are talking to.  This world is on a cusp of change, and I think that whether Progress comes at a price is a big question. Some advancements are for the better, but some come at a cost that people are only beginning to discover.

Of course, it’s often the bad guys of the story with the condescending attitude towards women or who want to eradicate all Witches and Warlocks. Her companion on the road, Dreadnought, clashes with Emily over other things. The two have a bickering sort of relationship and although this sort of thing suggests a romance is on it’s way (which is correct), the romance is a very low key one — the adventure and magic are in the forefront of the story most of the time, and the banter gave me a little chuckle or two as a bonus. This is not one of those stories where there’s a lot of sexual tension in my opinion, maybe because the focus on the book is more on the plot than it is on character development.

I enjoyed the way that magic was explained in this story. There are three forms of magic – animancy (spirit magic), sangrimancy (blood magic), and  credomancy (belief magic). Emily Edwards, who with her Pap, the local magic practitioners of Lone Pine, California, practice animancy. Dreadnought Stanton is a credomancer, and his magic comes from belief. The use of blood magic (sangrimancy) has been outlawed with a notable exception. Hobson takes the idea of magic and a natural explanation for it a bit further when she introduces an ecological component — magic, once used is absorbed by the Earth and recycled, and the process creates waste in the form of a sticky black tar-like substance known as Black Exchunge.  This has some significance in the story and I enjoyed learning as the Emily and Dreadnought did, the significance of Emily’s blue stone in relation to magic.

I’m looking forward to the next book, The Hidden Goddess, out this April.

Overall: A very fun story that combines pulp fiction, magic, Wild West adventure, a bit of steampunk and romance in a seamless way. I enjoyed the alternative history and how magic fit into the Victorian mindset where Progress and Tradition often butted heads. This is very much a plot-driven story, and I liked how the world-building felt effortless. The only thing that I personally would have liked was more room to really delve into the two main characters, but the second book promises to give us more, so I’m looking forward to it.