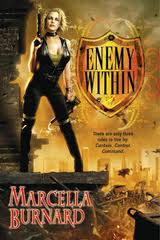 This book has been on my radar due to it being Science Fiction Romance from a new to me author. This is a review of an ARC that was passed along by a fellow blogger.

The Premise: Captain Alexandria Rose Idylle (Ari), is working on her PhD thesis on her father’s ship, the Sen Ekir, when it is commandeered by pirates lead by a man who calls himself Cullin Seaghdh. As a recent survivor of months of capture and torture under the Chekydrans, Ari lost her crew and then her command, and her father, friends, and the Tagreth Federated Command are all unsure she came back whole.  But this hijacking by Seaghdh, followed by one surprise after another, suggests that Ari may be right in questioning everything and everyone.

My Thoughts: Ari is a heroine with an interesting background. She’s been captured and released by the Chekydrans, had a distinguished military career, holds a degree in xenonanobiology, and ranks in energy blade competitions. On paper she’s borderline perfect, if not for how broken she is from her captivity. Most of the time, Ari is determined in and strong in adversary, but she also is prone to flashbacks and crippling insecurities.  Cullin Seaghdh’s character on the other hand, is sort of the handsome stranger, full of secrets that he keeps from Ari, but he’s not alone in doing that. I liked the idea of a relationship that develops along with the secrecy, however I have mixed feelings about how the romance was written alongside the space opera elements.

This science fiction romance definitely falls under the “sexy” umbrella. There’s lots of sexual tension between Ari and Seaghdh. For that reason I think that this book would appeal to romance readers who enjoy speculative fiction world building (I would compare the ratio of romance to world building and action to Nalini Singh’s Psy-Changling series). For space opera/science fiction fans unused to romance reading,  your mileage may vary on the lusty parts. Ari and Seaghdh’s attraction is a large part of the story. I personally tend to go for a low level of heat, and although there was not much actual sex in this story, the descriptions the hero and heroine’s physical reactions to each other are numerous. That’s usually OK with me, but I found that some of the situations felt a little forced or repetitive, such as stripping down naked in front of each other for a decontamination shower in the first 20 pages, or Ari’s frequent flip outs about Seaghdh’s true feelings and her the descriptions of Ari’s response to Seaghdh. This feeling that the story is being forced extends also to the space opera parts, and I think the overworked feeling I get from the story, is my biggest problem with this book.

The book is chock full of space opera goodies. Aliens, space fights, hijacking, there’s always some action going on, and plenty of conspiracy to go with it. The way Ari and Seaghdh look at every situation from the angle of people familiar with Military Intelligence can be dizzying to follow. Most of this is good and I would usually eat it up with a smile, but there were some parts where the logic jumped a little fast for me (I think one day I’d like to do a reread to see what I missed the first time), or parts where right after one near missed disaster, another occurs, followed by yet another. If I take each event individually, they are fine, more than fine in fact, but there is just so much going on.  If the book had been fiercely edited to remove the chaff, we’d be left with a book I’d love – with a great mix of romance and action, but as it is, there are actually too many ideas and extra scenes because of it.

Overall: Enemy Within takes science fiction romance and makes it it’s own. It shares tropes I’ve seen before, but the mix of breakneck action, a bit of angst and lots of lusty tension is a combination that feels unique in this genre. There was a lot I liked about this book, but there were also things I found problematic – mostly the parts that felt forced – one twist after another, Ari’s mood swings regarding the relationship, and the general feeling that too much is going on. I have hopes that this will improve, and am game to try the second book in this series, Enemy Games (May 2011), which features a hero and heroine introduced in Enemy Within.

Other reviews:
The Good, The Bad, and the Unread – A
The Book Lush – 4
Babbling about Books, and more – B+