Cinder
Marissa Meyer
As a fairytale retelling with a cyborg Cinderella, and set in “New Beijing”, Cinderpromised to deliver a story containing some of my favorite themes. I’ve had high hopes for this one so when I saw a contest for an ARC, I made sure I signed up. This review is based on an ARC copy I won from the publisher.

The Premise: It’s now 126 T.E. and in the teeming city of New Beijing, Linh Cinder is a talented mechanic who works out of her stall at the Weekly Market. While she’s a teen-aged girl, not your typical store owner, she’s also a cyborg, and thus the property of her stepmother Adri,  who uses Cinder’s income to run the household and keep her two daughter’s Pearl and Peony in relative comfort. Adri has no love for Cinder, and the feeling is mutual. Cinder’s life is not easy, but even the limited peace she has is gone when the plague comes to her home. While things are at their lowest point with her step-family, Cinder finds herself entangled in international politics and in the life of Prince Kai, heir to the Eastern Commonwealth. Somehow this is all tied to her own past and the ruthless Lunarians poised to take over the planet.

My Thoughts: This story starts off very well. It begins with Cinder at her usual stall in the market, a space that is obviously her own.  I loved the way Cinder’s skill as a mechanic and her ostracization as a cyborg are incorporated with the sights and sounds of the New Beijing marketplace. When Prince Kai arrives, incognito and carrying an android for Cinder to work on, he has no idea that Cinder is part machine. Cinder, faced with a cute boy that every girl in the city has a crush on, isn’t eager to reveal something that she’s vilified for on a constant basis. It was a great opening scene and the tension of secrets between the two characters added something to the whole meeting. Another great dose of drama is added when there is an outbreak of letumosis nearby, and the reader is made aware of this deadly and horrifying disease and how its victims are treated.

That was all on the first chapter. I was happy with just the thought of a story that contained Cinder, the prince, and letumosis, but the story becomes much larger in scope. Beyond Cinder and her step-family (whom we are introduced to soon after Cinder and the prince), are world-wide machinations. It isn’t long before Cinder’s world is upended and she is involved in a frantic see-saw between trying to save a loved one from letumosis and trips to the palace where she continues to run into Prince Kai and discovers surprising things about both herself and the Lunarians. All the while, Kai has his own problems. His father has the plague too, and the diabolically evil Queen Levana wants the seize power through marriage to an inexperienced young monarch.

I really liked Cinder’s character. She is a girl who doesn’t have many supporters but she makes the best of what she has. She knows how to fix things, she has a realistic attitude, and she’s rather scrappy when things go south. I adored all the little reminders of her cyborg status like readouts and her leg compartment that liberally peppered the story. Kai struck me as a generally nice guy trying to do the right thing under trying circumstances. There are brief sections of this book told from his point of view.  Overall, he’s not as well fleshed out as Cinder, but his frustration at his father’s sickness and the way the Lunarians are exploiting the situation is palpable.

There’s an obvious intent for there to be a romance between the two characters but the romance is not quite there yet. I had the impression that there was an instant like between Kai and Cinder, but that’s as far as it goes. With the weight of the world on their shoulders and with moments in each other’s company, it was a stretch to believe Kai would have any interest in Cinder being at his ball. Thankfully, the book didn’t try to sell me on a full-blown love between the two, which saves things somewhat, but it does skirt on the edges of disbelief without really going over. I think that the real romantic development is being saved for later books. I hope that the characters can spend more time with each other before the romance really happens.

Actually, a lot of this story felt like it was set up for later books. There are several ongoing threads that deal with Cinder’s past and her true identity which obviously won’t be resolved in this book. Unfortunately, there was a bit of frustration with having Cinder kept ignorant until the book’s climax. I could see where the story was manipulated there. I think that with the intent for this to be the series, it also necessitated that the Cinderella formula wasn’t adhered to in Cinder and the introduction of the ultimate bad guys – the Lunarians, in particular their evil queen. As bad guys go, I much preferred Cinder’s stepmother, who misdirects her anger and grief at her losses toward Cinder. Andi was a villainess with a motivation I understood. The Lunarian queen is just felt evil for no reason. Yes, fairy-tale bad guys are usually like that, and taken from that perspective, she is typical, but I wish Cinder could have stuck more to the original than it did.

I also was hoping to have a better sense of place in this story than I did. Other than the marketplace introduced all the way at the start of the book, there was little to show that the story was set in New Beijing. The only thing to indicate where everyone lived was their names. Even while preparing for the ball, the ballgowns sounded western: satin and tulle, big and fluffy, rather than silk and embroidered. I felt like the author had a missed opportunity in not making New Beijing a presence in the narrative.

Okay, so I have my complaints about this story, but none of them were deal breakers. There were things that I think affected my enjoyment of the middle part of the story, even though Cinder is well written and flowed well. I just found the middle part of the story not as compelling as the beginning and the end. There were parts that dragged because I felt like I could see what was going on behind the curtain. The ending was a good one though – it sealed my like of Cinder’s character and I enjoyed how the fairytale elements showed up. We’re left with plenty to look forward to in the sequels. Cinder continues with Scarlet (inspired by Little Red Riding Hood), Cress (Rapunzel), and Winter (Snow White). I will be interesting to see how the series plans to keep Cinder’s story within the frame of stories meant to be about other characters.

Overall: I loved the premise of a cyborg Cinderella so much that I wanted this story to really wow and excite me the way the premise did. The execution was good, but it didn’t thrill me like I wanted to be thrilled. The beginning and the end were great, but the middle suffered under the weight of being set up for a series and I had several qualms with the setting, romance, and antagonists. In the end, I liked Cinder, but it wasn’t a home run. I’d recommend this with reservations.

Other reviews:
The Book Smugglers – 6 (Good, recommended with reservations)
Good Books and Good Wine – loved it
Books and Things – 3 and a half stars (out of 5)
Pirate Penguin reads – positive
Giraffe Days – 4 giraffes (out of 5)
The Cozy Reader – a perfect score
On the Nightstand – “highly readable blend of science fiction and fairytales”
The Canary Review – 3 canaries (out of 5)
The Book Pushers – C+
Inkcrush – “It would have sucked me in big time when I was a teenager. I liked it as an adult.” 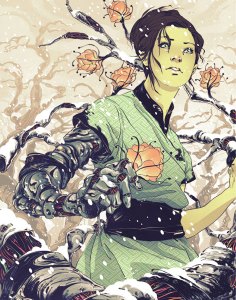