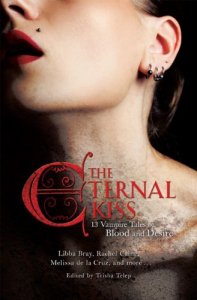 The Eternal Kiss:
12 Vampire Tales
of Blood and Desire
I actually tend to like anthologies because it gives me a chance to “try out” or find new authors I may not have tried out on my own. Usually there are always hits and misses, but what I liked about The Eternal Kiss was that although it is a young adult anthology and it’s about vampires it doesn’t make the mistake of only being about teenage romance, and it doesn’t shy away from the darker side of vampires. I picked this ARC up at BEA.

I did something a little different here – I wrote up my review as I read the book, just jotting a couple of sentences on each short story. Very brief reviews follow (my two favorite stories were the ones by Karen Mahoney and by Sarah Brennan):

1) Falling to Ash by Karen Mahoney – Vampire girl (Moth) comes home to find her sire wants her to get the ashes of a recently staked vampire. Really like this one, this author has been on my radar on LJ, but I hadn’t connected the the LJ user with “Karen Mahoney” (sometimes things get past me), until I had already read and liked this.  This is the introduction to a series about Moth, so now looking forward to it.

2) Shelter Island by Melissa de la Cruz – 15 year old Hannah has a mysterious visitor at night. I couldn’t connect with this one. I think the characters, particularly the female protagonist were a not substantial enough in the amount of pages this story was for me to grasp them.

3) Sword Point by Maria V. Snyder – Girl fencer discovers that the prestigious fencing school she goes to is more than it seems – interesting at first but then I started to lose interest halfway when the relationship part occurs. The action at the end felt very perfunctory.

4) The Coldest Girl in Coldtown by Holly Black – A bitten girl tries to stay human, but then learns her ex-boyfriend and a neighbor girl have run away to Coldtown, the vampire section of town. A dark story about the glamorizing of vampirism. Liked it, nice and chilling.

5) Undead is Very Hot Right Now by Sarah Brennan – A nineteen year old who has been a vampire for a year joins a boy band. Hilarious. I laughed aloud so much reading this one. Another author I plan to look for in the bookstore.

6) Kat by Kelley Armstrong – A teen is awoken by her vampire guardian and try to escape would-be captors in the middle of the night – Interesting. Ending makes me want to read more, maybe the start of a series?

7) The Thirteenth Step by Libba Bray – Teen gets a job at a halfway house which may not be all that it seems. I think my own experiences cloud the way I read this story. It bothered me that the protagonist become like the addict sister she considered selfish.

8 ) All Hallows by Rachel Caine – Vampire boyfriend of the narrator gets into trouble and she goes in to save him. Readers may need to have read other Morganville books. This is a short story in that world that seems to fit in the timeline after the first 4 or 5 books.

9) Wet Teeth by Cecil Castellucci – A vampire begins to feel alive for the first time in a long time after meeting a strange girl in the park. This one seems to focus on the ending, and left me a bit wanting for the rest of the story, but seems to be in the right vein for horror.

10) Other Boys by Cassandra Clare- A girl begins to get interested in the new boy in school, who says he’s a vampire. This one had elements of nice old school horror.

11) Passing by Nancy Holder and Debbie Viguié – A girl has to pass the final class in her vampire hunter academy – only one student will get a special elixar. A bit too complex of a back story to cram into a short story space.

13) All Wounds by Dina James – Girl discovers her grandmother and the bad boy in detention aren’t exactly who she thought they were, and neither is she. Looks like the start of a new series so there’s a lot of plot set-up, but not much time for more than brief character sketches.

The Eternal Kiss will be released July 27th.