I requested Seraphina from Netgalley because the summary mentions dragons that fold “themselves into human shape”. Shapeshifters in the fantasy genre is something I’m still thrilled by, even though I should have my fill already in urban fantasy. Not sure how, but it’s different I tell you. Other things that also drew me: tensions between humans and dragons, a heroine trying to hide a secret while working beside a “dangerously perceptive” prince, and the great blurbs by Naomi Novik and Tamora Pierce. Not to mention some very tempting book reviews. 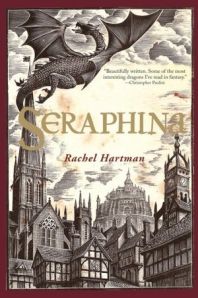 The Premise: (taken from goodreads) “Four decades of peace have done little to ease the mistrust between humans and dragons in the kingdom of Goredd. Folding themselves into human shape, dragons attend court as ambassadors, and lend their rational, mathematical minds to universities as scholars and teachers. As the treaty’s anniversary draws near, however, tensions are high.

Seraphina Dombegh has reason to fear both sides. An unusually gifted musician, she joins the court just as a member of the royal family is murdered—in suspiciously draconian fashion. Seraphina is drawn into the investigation, partnering with the captain of the Queen’s Guard, the dangerously perceptive Prince Lucian Kiggs. While they begin to uncover hints of a sinister plot to destroy the peace, Seraphina struggles to protect her own secret, the secret behind her musical gift, one so terrible that its discovery could mean her very life.”

My Thoughts: This story starts with Seraphina.

“I remember being born.
In fact, I remember a time before that. There was no light, but there was music: joints creaking, blood rushing, the heart’s staccato lullaby, a rich symphony of indigestion. Sound enfolded me, and I was safe.
Then the world split open, and I was thrust into a cold and silent brightness. I tried to fill the emptiness with my screams, but the space was too vast. I raged, but there was no going back.
I remember nothing more; I was a baby, however peculiar. Blood and panic meant little to me. I do not recall the horrified midwife, my father weeping, or the priest’s benediction for my mother’s soul.
My mother left me a complicated and burdensome inheritance. My father hid the dreadful details from everyone, including me. He moved us back to Lavondaville, the capital of Goredd, and picked up his law practice where he had dropped it. He invented a more acceptable grade of dead wife for himself. I believed in her like some people believe in Heaven.”

Not surprisingly, my first impression of Seraphina was that she is an odd duck. Clearly there’s something strange about her for remembering her birth, and the inheritance she alludes to. Then she tells us that her father has told her time and again that to stay safe she must stay under the radar.  That her secret, if discovered, would mean her death. Only a select few know it, among them her father and Orma, a her music tutor (who happens to be a dragon). But Seraphina can’t help herself. She doesn’t want attention, but she is herself. Despite her best intentions, Seraphina stands out. Her prodigal musical talent is difficult to suppress, and after she’s noticed for that, it’s hard to forget her.

When the story begins, Seraphina has been court composer’s assistant for two whole weeks. Two weeks of rushing to be ready for the kingdom’s forty year celebration of the treaty with the dragons where the Ardmagar (the dragon equivalent of a king) is scheduled to make an appearance. Then Prince Rufus is found dead during a hunting trip. He was decapitated, and whispers that a dragon is responsible begin to be passed along. Things are difficult enough with the peace without these new rumors — many Goreddis still fear the dragons and worry about Goredd disbanding the knights who practiced dracomachia (a fighting technique used specifically against the dragons).

Seraphina thinks something is about to happen because of Prince Rufus’s death. She isn’t sure what, but she wonders who really killed the Prince and why. Seraphina’s position within the palace gives her special access to the royal family and she tries to keep an eye out for possible threats. She devises her own ways of finding things out, often finding herself face-to-face with Prince Lucian, head of the guard, as a result — and he proves a little too smart and nice for Seraphina’s comfort (especially since he has a fiancée). In the meantime, she also worries about her tutor Orma and the ominous message he received at the Prince’s funeral. Interwoven with that is Seraphina’s own issues with keeping her secret — her flute solo at the funeral moved everyone to tears and of course made her noticed. I’m half tempted to say what Serphina’s secret is in this review (it’s a big part of her character), but I am not sure it’s exactly revealed in the first fifty pages and the blurb dances around it. Let’s just say it is a great secret for storytelling. There’s a lot of little anecdotes about Seraphina’s past and how they relate to her secret all while everything else is going on. Her struggle to understand her mother (who died at childbirth) is a big part of Seraphina’s ruminations. If that isn’t enough, there’s also this strange mental garden that is tied to Seraphina’s secret.

Maybe that sounds like a lot of odd little threads, but these things are related in a smooth and interesting way. This is the type of world building that you sink into and while it has that medieval, city-built-around-a-castle setting that a lot of Fantasy has, much of the world felt fresh and new to me. The highlight was that dragons can shapeshift into people. What I loved about this that is in Seraphina, becoming human is a truly alien experience for a dragon. They can’t really deal with a new body that sometimes makes them feel and think in ways dragons aren’t supposed to. They needs Censors to make sure they don’t go insane – which in their culture, is when a dragon allows emotion to overrule logic. Dragons literally have memories of such a distasteful lapse scrubbed away. Of course, with the dragons so concerned with being dragons and keeping themselves apart from what they think of as human weakness, they also stay unknowable to their human allies who say they have no souls. There’s so many little details like that that are thrown in here. Seraphina knows more about dragons than most people so she bridges the cultural gap in her narrative. Tidbits about dragon and human relationships are dropped as needed throughout the story (not to mention the cultures of neighboring countries Porphyry, Samsam, and Ninys), and they fascinated me. I couldn’t get enough of the meeting of different worlds.

The other thing I really loved about this story were the characters. Seraphina was my favorite. She has more than one facet – sometimes quiet and a bit grumpy, sometimes scared and secretive, other times just fierce and brave. She starts off as a sixteen year old girl who wants to blend into the walls, but as the story progresses her chutzpah shines through as she throws herself into stopping anything from ruining the treaty. I loved this, but I also loved her vulnerability because she has the daily anguish of hiding her true self. And let’s not forget the secondary characters. First of all: Prince Lucian – my goodness, the awesome interactions he and Seraphina have! There was something a little fun about how they both surprise each other, and I can’t wait to see how their relationship develops. Then there’s Seraphina’s father, who tells her to stay unnoticed every chance he gets, but who does so because of his fear for his daughter; Orma, who is a dragon and who has always seemed distant, but who Seraphina still trusts and loves; even Princess Grisselda, granddaughter of the current queen and Lucian’s fiancee proves to be more complicated than she initially seems.

Overall: You know those books that kind of make you excited because you read them and think, “This is right up my alley! This book has things I find awesome in it!” ? Seraphina is one of those books for me. I just want everyone who likes Fantasy with girls doing stuff (and dragons!) to read it already. The characters! The world building! Have I mentioned the shapeshifting dragons?! Alright, I get that not everyone loves YA Fantasy and books with a drop of romance, but if you like that sort of stuff, just a little bit? If you like the quality and creativity of Robin McKinley, Megan Whalen Turner, and Diana Wynne Jones? Then maybe you should try this one.

Seraphina is out July 10th

Other reviews:
Stella Matutina – ” SERAPHINA is just plain delicious from start to finish. I want all of you to read it as soon as you possibly can. “